He went 4-1 in his debut. This week, flightless birds and unbranded range animals are among his Maybes. 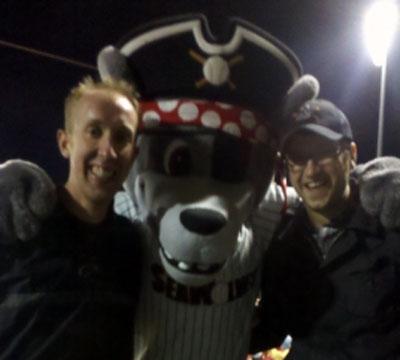 Thank goodness for the Boston Red Sox—my only loss of my first round of Monday Morning Maybes.

But why—you ask—thank the derailed Sox when Erie's SeaWolves, Bayhawks, and Explosion as well as Los Angeles's Lakers (and Kobe) came through for my four wins last week?

I'll tell you why: because Alex Sibley threatened to not talk to me for two weeks if I went 5-0 my first week into it.

Geesh. That was close.

OK, so I'm sure he was joking, but friendship's no laughing matter to me—especially when Maybes are involved.

So yes, thank you, BoSox, for helping me keep a friendship alive—maybe. Seriously though, can someone explain to the sports world what the heck is happening up there in Bean Town?

And Alex, can you ever forgive me if I happen to go 5-0? I doubt I will, but I don't want to have to Maybe a loser every week as to go 4-1. But then if I'm purposely Maybeing a loser, am I still winning, if I'm… OK. Let's get out of that cycle right now.

OK, all asides aside—I probably end up on more tangents than a high school geometry class—which is probably why Lee thought I thought Shaq played baseball. Nope. Just scattered random thinking mixed with slow fingers trying desperately to keep up as I pound on my ol' trusty HP laptop (can I have some endorsement/ product placement cash, now please?).

But yes, asides aside, the bottom line is that I went 4-1 in my first outing. Not so bad for a guy who chose a team based on talons alone.

So do I record four 'Ms' instead of 'Ws' in my column?

Nope. Absolutely not, according to Lee—who reminded me there's Ws and Ls and 'no crying in baseball.' Thanks for the Tom Hanks reference, Lee—now you're speaking my language.

And besides, riding high on an 80 percent winning record might just have given me the confidence I need to make some great Maybes this week. Before I would have settled for—even been elated about—going 3-2, but now that I've tasted 4-1, I've got bigger demands of myself.

But, hey, if this thing still finds a way to belly-up, I can look back and say, 'this was as good as it got,' which will likely make me think of movies and make me happy again, since I might be better off locking some films instead of playoff pushes.

Hey, speaking of playoffs, both the hardwood and ice have playoffs all over them right now. Why not shoot for Maybeing some playoff wins?

Besides, there's no SeaWolves Buck Night for me to selfish demand a win for and the Hawks, despite awesome talons, are now out of the playoff race. I do have to congratulate them those for an outstanding season in which they broke numerous records for the young franchise. Here's hoping for another great season next year, guys.

But for now, here's four playoff Maybes you might be able to think you can seemingly count on this week and one local Maybe for regional flavor.

Monday night the Pens take on the Tampa Bay Lightning. It'll be the first of the next two games in Tampa Bay.

OK, the Lightning just handed the Pens a 5-1 beat down in their own rink, and it's still unclear if Sid the Kid will hit the ice even though he's been hitting the ice now for a month. Yeah, I'm not too clear on that either, but at least I can applaud the Pens for taking head injuries seriously.

OK, back to games and away from morals.

So after a massive loss and still a hole without their center and captain, why go with the Pens?

Here's why: Fleury's polar between the pipes. He's either golden and unbeatable or falls victim to a mind-melting collapse. Now that he's had the collapse, I think he wants to spit out the taste of defeat as quickly as possible. He won't fly high the whole time—besides, everyone knows penguins are flipper bird, not feather bird and can't fly. I'm sure he'll fall flat again, but I think he's here to play for real now.

And I don't know about you, but if all reporters kept asking me was, 'Where's Sid? How will you manage without him? Isn't he, like the best like player ever? Like, oh my God Sid. Wait what's your name again, chump?' yeah, I'd step up my game too to prove something. I think the team might be drinking this nectar right now.

This is why I say take the Pens to have closed out the series and moved on before I have to sit down at these beautiful HP keys again.

Dallas had a nice lead built in game one and then suddenly Portland jumped out in front. Portland. You heard right. The winner of 'most depressed city' awards. Shouldn't have been so depressed with the prospects of stealing game one in Dallas, right?

OK, so if I thought Kobe was hungry—and believe me, with the Lakers falling to the Hornets in Game 1, I'm staying far away from any Maybes with the potty-mouthed Kobe and them—Dirk is famished.

The guy wants another ring. Period. Year in and year out, the Mavs almost make it. I have a gut feeling this year will be different—well, maybe at least this round for now.

Dirk will ensure the Mavs hit the road Tuesday night with two wins under their belts.

Seriously, here comes the boom. At least that's what the website says and that's enough for me.

Well, maybe not. Maybe it's the fact that the Explosion are playing on their own turf and are settling into a rhythm, which is helping them feel at home in the Tullio. Sure their only loss of the season came at home, but this team got its first home win last week when they burnt up the scoreboard on the Stampede as they ran them over. Go ahead, pun enthusiasts, rejoice over that last sentence.

Tawdry wordplay aside, I think it's time for the Explosion to make a statement game at home, and while I think the score will be close, I think the home team will come out victorious.

The dude is class. The guy's a team player and gets his job done quietly. Sure, the Nuggets have been flying high—not necessarily on the wings inked on the bird man alone, although he's got some seriously sweet looking tats. And that hair? Com'on, you can't bet against that, right? Seriously, the dude probably goes through Axe products—tread softly and hope for endorsements—by the gallon per night.

Basketball. Got it. Playoffs. Back in the game.

OK, so the Melo-less Nuggets have been good since the split. I hear they could full custody of George Karl and visitation rights with Chauncey from New York, but here's where the steam runs out on the dream and the rebound.

Don't get me wrong, I think the Nuggets have a real chance of taking a  game or two at home, but Durant looks locked on and ready to go. No media. No hype. Just win games. Basically the opposite of South Beach. Which is reason enough for me to say take Durant and the Thunder to walk out of game two Tuesday with a win, having axed the competition.

My college roommate was from Buffalo. I'm originally from the next to the last stop in western PA before you hit West Virginia making me a Pixburgh guy.

Battle cries rang throughout Erie, the neutral turf between our points of origin. Buffalo vs. Pixburgh.

Too bad we were yelling at each other over different sports.

See, hockey's his sport and football's mine. And although I'd just as soon take the low road and sent an obnoxious text saying 'go, Philly,' I can't bring myself to do it. And not even because I don't want Philly to win since apparently I hear that'd be sacrilegious or something.

Anyway, the Flyers will take to the ice in Buffalo Monday night, and although I'm still not sure which way the series will go, I'm pretty confident Buffalo will take this win at home. Besides, the ol' roomie deserves a break since he even stuck with the Sabres after they adopted that awful "slug" decal.

So this pick's for Nick. You deserve it, buddy: Buffalo laces up for a win Monday night.

So for this week, take flightless birds, unbranded range animals, the act of bursting forth with sudden violence or noise from internal energy, the audible result of lightning, and swords.

All solid Maybes in my mind.