Low in High School is an album that is decidedly very political. 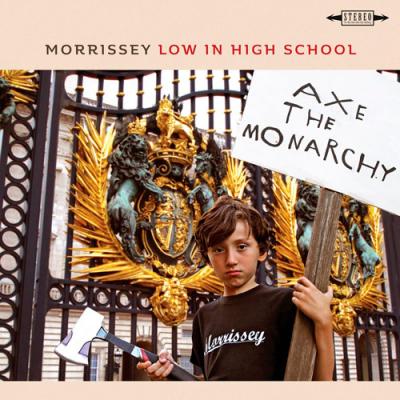 Separating art from artist is an age-old argument that never fails to appear when a celebrity fails their audience. Fans of artists such as Kanye West and Mark Kozelek have learned this the hard way. It's a defense mechanism to justify the music that means so much to us. But you can only fight for so long the fact that an artist lends every part of themselves — good and bad — to their art. This is not a review of Morrissey's personal character, but ultimately, it is impossible to divorce some of his nasty politics from Low in High School, an album that is decidedly very political. Musically, this is the most energetic Morrissey has sounded in years. The album is split between Your Arsenal-inspired riffs, Casio-underlined Smiths callbacks and the usual amount of strings and horns that have defined Morrissey's arrangements since You Are the Quarry. There are some great moments here, including massive opener "My Love, I'd Do Anything For You" and essential single "Jacky's Only Happy When She's Up On the Stage." Still, rumblings that the song may be about his pro-Brexit stance (fueled by rumors that Morrissey began chanting it during a recent performance) make the single, and by association, the album, a tough listen.