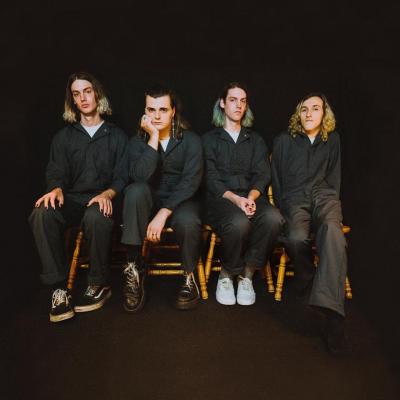 Kris Herrmann
Mover Shaker, a genre-bending band from Detroit, will help the Andromeda Agency reintroduce a familiar venue u2014 The 10/20 Collective (formerly The Ballet Huas) at 1020 Holland St.

Mover Shaker and niiice are playing at the newly dubbed 10/20 Collective (formerly known as The Ballet Haus), along with Speed Dial and Penny Racer, presented by the Andromeda Agency.

Detroit's Mover Shaker made a name for itself with its debut LP Michigania in 2016. Michigania showcased the band's versatility and musicianship, working in complex time signatures and interspersing its dramatic Midwest emo outbursts with a bit of shoegaze and even a little progressive rock. On its recent sophomore release Another Truckstop, the band once again refuses to tie itself to a single genre, with influences ranging from new wave, to rock, punk, and even a little disco. This album will keep you guessing from start to finish.

On tour with Mover Shaker are niiice, a pop punk trio from St. Paul, Minnesota. niiice released its first album, Try To Stay Positive, in 2018, and followed up with the five-track EP Never Better in 2019. Its music ebbs and flows between upbeat pop punk and somber jams, with emotive and personal lyrics tying everything together.

Apart from the music, the show will feature clothing vendor Melancholy_ and food vendor A Waffle Miracle.