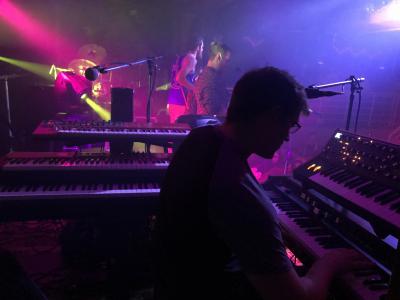 Nick Warren
Chicago's Mungion are no strangers to improvisation u2013 after all, they once played a show with another band's equipment after theirs was stolen. They will treat the Kings Rook Club u2013 presumably with their own gear u2013 to a night of progressive jams on Saturday, January 26.

When I think of the first time Mungion appeared and floored us — along with 1,000 or so other people — it strikes me how close they came to … well, not.

In 2017, the Chicago-based quartet, then only a couple of summers of playing out behind them, had their touring van — and equipment amounting to over $40,000 — stolen while in Detroit the night before they were supposed to play a set at the Night Lights Music Festival in Sherman, N.Y.

That would have stopped a helluva lot of people, but this band (pronounced to rhyme with onion, I came to be corrected later) found a way there, and, on Buffalo-based brethren Aqueous' borrowed equipment, gave what was, hands-down easily one of — if not the — most talked-about and freaked-out-over performances that entire weekend.

Their momentum's never ceased, and they've spent the last couple of years doing more of the same throughout the country, continually working on new music with two LPs behind them (releasing their latest, Ferris Wheel's Day Off in October), and carving a pretty deep niche as one of the at-large live progressive/improvisational scene's bands to most definitely not miss.

Trust us on this: Mungion isn't just some vanilla jam. — Ryan Smith