Looking for something to do February 2 that involves the likes of classical music and Radiohead? Then check this out 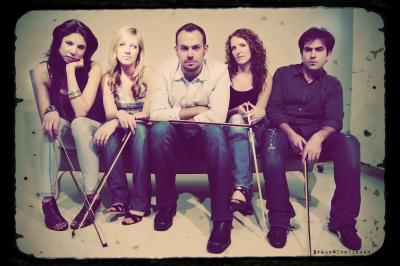 The Music at Noon Series is currently in its 22nd season and this time it will be with musicians offering an eclectic and wide range of selections, at random, and for free. The series at Penn State Erie, The Behrend College typically offers three events each semester, totaling six performances each year and the ever-innovative and stereotype-breaking Sybarite5 will open this season. "Our mission is to present world class performances," said Gary Viebranz Logan Series director. "And we are fortunate to be able to attract some of the hottest performers in the world of chamber music, whether they are among the most highly established or the rising stars."

The Music at Noon Series proudly kicks off its Spring 2012 season by welcoming Sybarite5 as the first of three performers this semester. "Guests can expect an informal atmosphere, where they are welcome to bring their lunch experience a relaxed concert atmosphere compared to the stereotypical 'classical' concert," Viebranz said. "Musically, they can expect the unexpected, in part because of the wide breadth of musical styles explored by Sybarite5.

Sybarite5 has played hundreds of shows, including venues such as the Lincoln Center and the Library of Congress, and have performed for a varied audience ranging from the Holiness to the Dalai Lama. They are no ordinary chamber quintet though. Known for their eccentric range of music, they play everything from Mozart to Radiohead, and everything in between.

This concert has been billed as "The Shuffle Effect," where the traditional set list will be replaced by selections chosen from an iPod in shuffle mode. "We hope that our audience will come away with a deeper understanding of the range and breadth of experience that chamber music can provide," Metcalf explained. As each tune comes up at random during the concert, the group will introduce the song, provide some background information and then perform it.

"We have a feeling that this may be the first classical chamber music concert they've attended where the performers do not know what pieces they will play and in what order until the very moment they perform them," Metcalf said. "Our unique concert presentation, The Shuffle Effect, involves us loading our repertoire onto an iPod, pressing 'Shuffle,' and playing whatever comes up. This process occurs before the audience's eyes. The pieces vary in style from Mozart and Dvorak to Led Zeppelin and Radiohead, so audiences should be prepared to hear anything and everything."

Sybarite is looking forward to this Erie concert for many reasons. First, it will be the group's first concert of the year. Second, cellist Laura Metcalf has ancestral roots in the city. Her very own great-grandfather was the music director for the Erie Philharmonic.

This concert series is fully funded and offered free of charge to the audience thanks to the Kay Logan Trust. Additional funding for this series is received from the Penn State Behrend Student Activity Fee, Pennsylvania Partners in the Arts, and the Erie Arts Endowment of ArtsErie. The additional spring performers to look forward to are the Silver Roots on February 29 and the Walden Chamber Players on March 29.

When: 12 p.m.
Where: Penn State Erie, The Behrend College, McGarvey Commons
Cost: Free and open to the public
Contact: 898.6289