Stephen Malkmus & the Jicks, Burial, Nick Cave & the Bad Seeds, and Neil Young -- all reviewed for your listening pleasure. 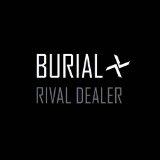 Wig Out at Jagbags

Nearly 15 years since the release of Pavement's final album, Stephen Malkmus is still making this whole music thing look, and sound, easy. The 47-year-old indie legend may be older, but Wig Out at Jagbags, his sixth album with The Jicks, maintains a much younger feel then someone a few years away from AARP status. As always, Malkmus' inventive lyricism is on display, with lines like "I wouldn't jerry rig or candy coat your Latin kisses" and "We lived on Tennyson and venison and the Grateful Dead" popping up in excellent single "Lariat." It shouldn't be surprising that the album feels like a sunny drive in the '90s, although songs like "Rumble at the Rainbo" finds Malkmus giving a glance into the mindset of a longtime rock 'n' roller. Not everything adds up all of the time, but there are plenty of things to like on Wig Out at Jagbags. Alex Bieler

While many EPs can act as a taste test of sorts, River Dealer is quite the meal. At nearly 30 minutes long, the three-track release by Burial, the stage name of London producer William Bevan, provides plenty of punch for its EP status. Lead cut and title track "River Dealer" is essentially three songs in itself, a growing intensity surrounding a distorted vocal sample of Gavin DeGraw (yes, of "Chariot" fame) before settling into a gentle, ghostly final third. The EP's lone sub-10-minute entry "Hiders" continues the softer movement, with a warm, pulsing aura centering the five-minute track. River Dealer closes out with the 13-minute "Come Down to Us," where Bevan treats listeners to doses of sitar, static, falling rain, and his trademark processed vocal samples, most notably those of Lana Wachowski's speech after receiving the Human Rights Campaign Visibility Award. There's a lot to listen for in just three tracks, but it's well worth the effort. Alex Bieler

Nearly a year after the release of the excellent Push the Sky Away, Nick Cave & the Bad Seeds continue the vibe from their latest studio album on Live from KCRW. While lacking in the raw power of some of its Bad Seeds predecessors, Cave and company's latest tracks still maintained a wonderful slow burn, so this latest live album shows the band in a more laid-back setting, an intimate 10-song set recorded between Coachella appearances. Live from KCRW showcases four songs from Push the Sky Away, including the hypnotic "Higgs Boson Blues," although older tracks like the gorgeous "Far From Me" provide some punch from the depths of the Cave catalog. The most fascinating parts of Live from KCRW happen between the songs, as a very talkative Cave chats with the audience, takes requests, and jokes around, a lighthearted perspective of a normally intense band. Alex Bieler

Live at the Cellar Door

If at first listen you think this newly released solo 1970s show at the legendary DC venue sounds a bit familiar, you're right. Seven of Cellar Door's 13 tracks appeared on another of Young's Archives series, released over a half of a decade ago. But the distinction in totality between that release and this one makes all the difference. Where '71's Massey Hall features Young promoting Harvest just at the brink of its commercial success, Cellar Door finds Young looking back at After the Gold Rush and Everyone Knows This is Nowhere in a stripped-down, honest, and beautiful collection of these songs at their raw best. "Cinnamon Girl" sounds grand, yet open and hauntingly striking on piano, while Young's distinctive tenor voice nearly cracks with ache on "Don't Let It Bring You Down" in an intimately emotive moment of just man and guitar and a welcomed additional perspective of a living legend. Ben Speggen

stephen malkmus and the jicksburialnick cave the bad seedsneil young