Heathers: The Musical at Gannon University 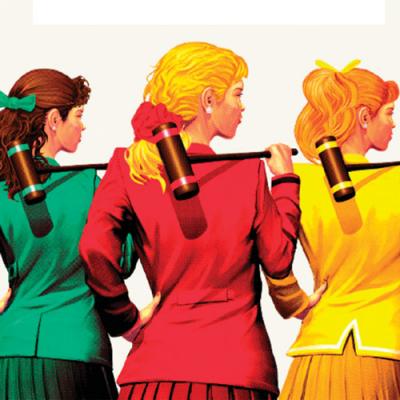 Most will recognize Heathers as the 1989 black comedy film starring Winona Ryder and Christian Slater. A non-horror cult classic, the Michael Lehmann film is still campy enough to warrant repeat viewings (especially as the Halloween season looms ever closer). Some Gen Xers may be surprised to hear that the original film remains relevant today, but one must remember: Millennials are shamelessly invested in revisiting the trends and art of past decades (especially the 1980s and 1990s). It also doesn't hurt that the film is currently available on Netflix.

But why watch the film for the umpteenth time when you can attend a local production of Heathers: The Musical at Gannon's Schuster Theater? According to cast members Michael Haas and Grace Shaefer, the production not only offers all of the film's sardonic wit, but perhaps even more than that.

"This is such a unique and incredibly enjoyable show to watch and be a part of because of how it seamlessly deals with serious matters while adding bits of completely hilarious comedy," says Schaefer, who plays lead Veronica Sawyer. "It shows the intense struggles of high school, where everything seems like life and death, but throws in twists that will make you laugh until you cry."

"Heathers is an intricate look into the psychological evolution of the contemporary mindset of the prototypical teenager," says Haas. "The angst and existential agony of the ˙80s original still exist, but with a more delicate subtext. This jet black comedy covers everything from depression to LGBTQ issues and even neo-anarchism."

Like most college productions that debut in the fall, Heathers: The Musical was put together by a cast and crew of students in just a little under a month. But as many were quick to point out, this only seemed to motivate them further.

"It has been a very tight schedule of rehearsals in which we blocked scenes, choreographed numbers, performed stage combat and safety, and learned our vocal arrangements," says cast member Seamus Clerkin, who plays jock Kurt Kelly. "Even with the short amount of time, I have indubitably enjoyed the process of putting Heathers together and we cannot wait to put the show on for audiences!"

"I am thrilled to be a part of this production," says Oros. "The cast and crew are so enthusiastic and I have never been more eager to see the final product of a show before."

And with that in mind, there's hardly a production more deserving of being labeled a "Must See Show" than a cult classic arranged by the generation that cares about it most. — Aaron Mook