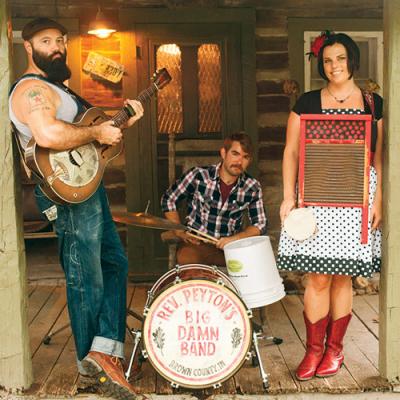 Strangely enough, fans of "the scene" circa 2010 should be excited for this one. Once prominent in the Alternative Press and Vans' Warped Tour circles, American country-blues band Reverend Peyton's Big Damn Band will be performing a headlining set at the Kings Rook Club this month. Supported by Erie's own Broke Boland Band and Matt Texter, Reverend Peyton's Big Damn Band will go on at 10 p.m. sharp in the Downstairs Concert Complex.

Reverend Peyton is known for his "booming voice," noted to be "as big as he is!"

Reverend Peyton's Big Damn Band released their most recent album, The Front Porch Sessions, on March 10th, 2017 — their first since 2015's So Delicious. Released on their own private label, Family Owned Records, The Front Porch Sessions are comprised of 10 original songs and one cover song (Furry Lewis' "When My Baby Left Me"). These recordings are noted as being quieter, with drummer Max Senteney even electing to play the suitcase rather than typical percussion instruments to better reflect the sound of the band playing on their own front porch. Reverend Peyton is known for his "booming voice," noted to be "as big as he is!" while the Big Damn Band utilizes unconventional instruments (including banjos, washboards and slide guitars) to churn out "romping, foot stomping roots" alongside him. Unique from the number of jam bands that populate the local area, this nationally known country-blues band (backed by some of our most talented native artists) is one Erie music fans will not want to miss. — Aaron Mook