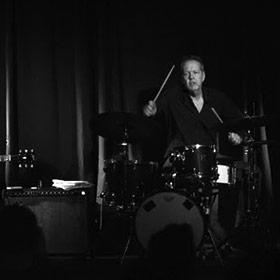 Tom Rainey Trio with Laubrock and Halvorson are set to jazz up Erie's Performing Artists Collective Alliance. Led by percussionist Tom Rainey, Tom Rainey Trio is a musical experience rooted in "avant jazz" and the member's shared skills in articulate musical improvisation. Perhaps most interesting about the trio are their diverse backgrounds and the way they lend to a final product; despite all three artists joining forces in New York, guitarist Mary Halvorson is the only one originally from the city. Rainey was born in Pasadena, California and saxophonist Ingrid Laubrock originally hails from Germany. Separately, the achievements of these artists are astounding and lend to the accomplished sound of their live act. Rainey also performs with jazz quintet Obbligato while Halvorson has performed in a trio of her own and recently released solo music under the moniker Meltframe.

This year, Halvorson was named the world's best jazz guitarist by the Downbeat Critics Poll, dethroning longtime winner Bill Frisell. Meanwhile, Laubrock has recently received acclaim in the form of the 2014 German Record Critics Quarterly Award and Best Soprano Saxophonist in the 2015 Downbeat Poll. As Tom Rainey Trio, these three innovative composers build an atmosphere for art and music fans unique from any other Erie performance. This, paired with the fact that the event is hosted by Rick Lopez, drummer of local experimental trio Fall Risk, makes Tom Rainey Trio at PACA a truly must-see show. — Aaron Mook