Looking for something to do Wednesday? Check this show out. 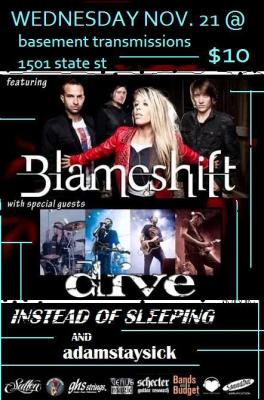 "No Drinking, No  Drugs, No Drama." Basement Transmissions, a safe and fun all-ages venue is hosting national and international music acts this November 21. Blameshift, Dive, Instead of Sleeping and Adam StaySick bring a forgotten, energetic flavor back to the music scene of Erie, this November at Basement Transmissions. You will not want to miss this show.
Blameshift is a four-part band hailing from Long Island, N.Y., and has been blazing their own independent path across the nation with their high-powered sound and live experience, Blameshift is aiming to please, tease, and release tensions by rocking out to original riffs enough to move the hardest bikers in the smallest places.
Travelling with them is the up-and-coming sound, Dive, a straightforward band of aggressive and melodic rock that compares to the sounds of Three Days Grace, Hoobastank, and Linkin Park; whose experience with local scenes, and self-produced albums have gained widespread attention for this dynamic band. They'll hit you fast and hard with a fury of tight rhythms and distorted guitars from beginning to end.
Instead of Sleeping is a band that will leave you thanking yourself for choosing to come out, instead of sleeping at home. Hailing from Pittsburgh.Since 2010, Instead of Sleeping has evolved into a multi-instrumental outfit comprised to two drum kits, horns, keys, and a myriad of other sound that transforms the band from a traditional indie-rock quartet into a swelling stage presence that captivates audiences up and down the East Coast.
Opening and providing cohesion to this vibrant show is solo artist Adam StaySick. StaySick has been writing, rocking and working the music industry to create the exact musical fusion his "Sick" mind generates. Having done his time at Warped Tour and other festivals, he has chosen to make Erie his new homebase, and taken on the task of reviving the music scene through shows like these.
Basement Transmissions, on State Street and 16th, November 21, at 7 PM: $10. See you there