Bohemian Rhapsody Hits All the Cliches of a Biopic 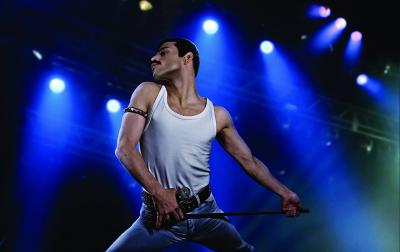 At this point, the biopic of a famous musician doesn't even need to be seen for audiences to know what to expect. From The Doors to Ray to Walk the Line, everyone knows the score: Some misunderstood genius rises up the charts, indulges in hedonism, has a tumultuous love affair and almost loses it all before redeeming themselves with some epic concert performance. Roll credits. Bohemian Rhapsody doesn't even attempt to be anything different. As I watched it I thought to myself: "are they really going to hit all the cliches that were parodied so brilliantly in Walk Hard?". Yes, they are.

The film follows the life of young Farrokh Bulsara (Rami Malek) who becomes the lead singer of a struggling college band. With his influence, the band begins rising in popularity, becoming the world famous Queen and he becomes legendary frontman ... Freddy Mercury. We follow Mercury's ups and downs, his struggle with his sexuality and eventually Queen's epic performance at Live Aid.

That's all that can be summed up about the film. It's a VH1 Behind the Music special with a blockbuster budget. As for Malek's performance as Mercury? It's pure wax museum. He gets the look and the mannerisms down perfectly, but at no point did I feel like I was watching a real person onscreen. The film has occasional interesting moments, a great soundtrack (yes, Queen still rocks) and even a funny reference to Wayne's World of all things, but nothing more. A rock legend deserved so much better. — Forest Taylor