Fundraiser for Portrait of a Universe currently underway 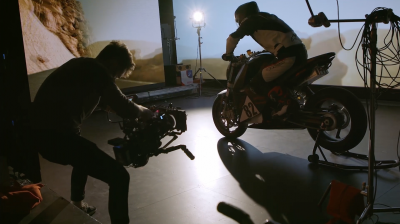 At the premiere of their debut film Alexander the Brain, Oddity Productions announced the start of their newest project – a film created using virtual production. The film, Portrait of a Universe, takes place in a near-future where space travel becomes readily accessible through personal vehicles co-piloted by artificial intelligence.

The story follows an aging artist who spends his remaining years traveling the stars and attempting to capture the vastness of the universe in his work, addressing the relationship between art and humanity.

The project will be completed in collaboration with the Rochester Institute of Technology, using a massive high-definition LED wall that's programmed to show an environment, picked up by the camera that is synched to the screen. This allows the camera to move around subjects and react in real-time, much like an actual environment.

Oddity Productions hopes that this experience will inspire interest in the region with hopes of bringing that scale of virtual production to Erie in the near future.

"One of my favorite things about films is that they uplift people, and creating them does the same," said Danny Pakulski, partner at Oddity Productions.

Bringing technology to the area would unlock a vast amount of opportunities for both creative projects and commercial work as creators and companies would be able to build virtually any environment for their projects.

Oddity Productions launched a $14,000 fundraiser to retain the fair compensation of workers along with expenditures for the project as the industry continues to grow.

In a panel discussion held at the premiere, local filmmakers commented on the possibilities in the area. John Lyons, known for both his feature films and short documentaries, said the base of comradery and support already exists in Erie along with the talent and creativity needed to fully benefit from these types of projects. Lyons called for more support coming from the top down in Erie.

Oddity Productions' Simon Yahn commented on the benefits of filmmaking as they progress conversations surrounding current issues. Yahn said their mission is to empower creators and artists, enabling them to bring their vision and message to fruition in a way that is understood by the Erie community at large.