New Year's Eve on the Town

If you're not staying in with the kids or heading out of town--and don't already have set plans--be sure to check out some of Rebecca Styn's recommendations for how to spend your New Year's Eve. 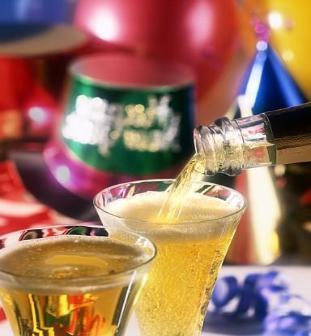 Last year, event planner extraordinaire Heather McBrier and I hosted "the Greatest New Year's Eve Party on Earth," at the historic Warner Theater. Okay - it was a carnival themed event, which is really why we used that title. Anyhow, in addition to providing the major staples (liquor, music, and hors d'oeuvres), there were fortune tellers, palm readers, jugglers, and balloon artists. We had a popcorn- and candy-themed bar, full-size Barnum and Bailey type prints for photo-ops, hula-hoopers, clown noses, and mustaches for props; scantily clad belly-dancers that performed with live snakes [okay, maybe we weren't really allowed live snakes – this is actually a bit hazy as I recall now…], a light show, champagne toast, and enough bubble machines to make me feel like I was in a scene from Willy Wonka (and to cause a few wipeouts on the dance floor).

And yet, with all the glamour and craziness this party had to offer, many of you still wanted to honor your own personal time-honored traditions. And we get that. So, this year, instead of hosting one of our own, I thought I'd support one of the many time honored traditions Erie has to offer. So, if you're not staying in with the kids or heading out of town – and don't already have set plans – be sure to check out one of the following  - and if you see me, I'll buy you a drink. Promise.

Salute to the Crooners

If you are a Broadway music aficionado, this concert is not to be missed. The "Broadway Hit Parade," will feature selections from The Secret Garden, Peter Pan, Sunset Boulevard, Camelot, Wicked and more! directed by former Playhouse Managing Director, David Matthews, and Andrew Rainbow, this 100-plus member cast and orchestra will feature the best of the best Erie has to offer. Soloists include: Kate Amatuzzo, Trisha Yates, Shawn Clerkin, Joe Greulich, John Burton, and more – in addition, Lindsay Terrizzi-Hess and Ray Flynt will return home for the holiday to lend their vocal stylings to this classic treat. 7:30 p.m.|$26.50pp|454.2852 for tickets.

Boogie on the Bay

In its third year, the convention center is following its own time-honored tradition and is bringing back Redline – a band who's been seen on The Style Network's "Whose Wedding Is It Anyway," performed for the Cast Party for "Extreme Makeover Home Edition" and the feature entertainment for the Ohio Governor's Inaugural Ball – this 12-piece, versatile band offers a full spectrum of musical emotion -  from high energy dance music to the golden age of swing – and third time must be a charm. In addition, there will be a special appearance by Godzilla, full bar, and carving and appetizer stations galore throughout the entire evening. 9 p.m.|$40pp|452.4857 for tickets. [oh, and I might have made the Godzilla part up].

After you've lost all your money at the slots (or tables), head over to the Clubhouse for a little bit of country with Chris Higbee. 9 p.m.|$20 advance| 866.8353 for reservations.

For any of you that don't want to commit to a full night extravaganza, many local bars will be ringing in the new year starting a little later (generally around nine or ten) with their own celebrations – The crooked i will play host to a Phish saga with Eric Brewer and Phriends from 10 p.m. to 2 a.m.; Docksider will host their own dance party/open bar/full buffet from 10 p.m. to midnight; and Erie's premier Roots reggae outfit Chaka returns to the Vermont Tavern starting at 9 p.m.

Other great happenings can also be found the New Year's Eve column featured in the last issue of Erie Reader, so grab an old copy or head to the website for a listing of other events.

And, please remember, on this overindulgent holiday night, we at the Reader want you home in one piece. So, don't drink and drive; instead, call for a ride home. Erie Cab and UPMC Hamot are once again sponsoring their free Holiday Care Cab. Services runs from 8 p.m. to 3 a.m. and must be picked up from a licensed drinking establishment (a.k.a., not someone's house). Drivers will take you as far west to Millfair; north to the water; south to I-90; and east to Boyer Road. Call 461.TAXI.