Free parking? There's an app for that. 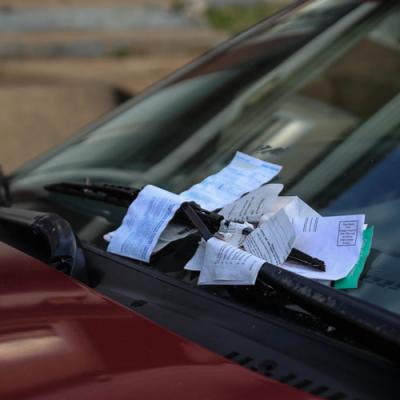 Beautician Sarah Bryan, 28, of Wakefield, England, who garnered worldwide notoriety last year when she introduced a wearable dress made of 3,000 Skittles, returned this summer with a wearable skirt and bra made of donated human hair (a substantial amount, she said, pubic hair). She admits having had to work in an eye mask, breathing mask and thick gloves, out of fear of donors' hygiene habits. (More conventionally, designer Van Tran of Brooklyn, New York, won the 12th annual (wearable) Toilet Paper Wedding Dress design contest in New York City in June, with a $10,000 prize from sponsors Charmin and Ripley's Believe It or Not.) [Metro News (London), 7-5-2016] [Washington Post, 6-20-2016]

Attorney Lee Pearlman finally earned an acquittal in June (after two hung-jury trials) for his client Danielle Goeller one of a seemingly increasing number of drivers who hit pedestrians but claim they were unaware of anybody being hit. Goeller, 28, a trauma-room nurse with no intoxicants in her system, had struck a 60-year-old man on a busy, heavily lighted Tampa street at 11:45 p.m., cracking her windshield but drove on without stopping. "What does she think she hit?" asked the prosecutor. "A deer? A bear?" Responded Pearlman, "She's a scared girl in the middle of the night who doesn't have the life experience other people do." [Tampa Bay Times, 7-1-2016]

Picturesque Torrelodones, Spain (pop. 22,000), has 6,000 pet dogs and apparently few conscientious dog owners, which town leaders say accounts for the nearly half-ton of "litter" that accumulates daily. The town's latest bright idea: installing a 7-foot-high, 10-by-10-foot brown, inflated plastic "swirly" in the center of town as a reminder to residents to pick up after their dogs. (Spain's The Local reported in June that other towns have begun to tackle the problem as well, such as with DNA testing of dogs and street-scrubbing punishment for guilty owners.) [The Local (Barcelona), 6-3-2016]

British student Joshua Browder, 19, created an easy-to-use computer app to help drivers fight parking tickets they believe unjust and now reports that users have won 160,000 cases (out of 250,000), all in London and New York City, by following his question-and-answer "chat" interface at DoNotPay.co.uk. Browder said he was motivated to develop the app (which, as of now, is still free of charge) after himself getting about 30 tickets he says he did not deserve. [Metro News (London), 6-28-2016]

A bicycle thief was stopped on June 10 when the bike's owner and several other people chased him from the Wal-Mart parking lot in Eagle Point, Oregon, drawing the attention of a passing rider on horseback (Robert Borba), who joined the chase and moments later (according to a report in Portland's The Oregonian) lassoed the man and restrained him until police arrived. (2) A kite surfer on a Sussex beach south of London got into trouble on June 26 and was unable to float back to land until he was rescued by two Good Samaritans in kayaks. The saviors happened to be dressed as Batman and Robin for participating in the Shoreham Beach Superhero Paddle. [The Oregonian, 6-10-2016] [Bognor Regis Observer, 6-27-2016]

Not only are almost all federal employees above average, they are nearly all superior workers, according to a June Government Accountability Office review of agencies' personnel-rating results. (Yes, the review included the departments of Veterans Affairs and Homeland Security.) Most agencies use a 1 ("unacceptable") through 5 ("outstanding") rating system, and GAO found that 99 percent were rated either 5 or 4 ("exceeds 'fully acceptable'"). [Washington Post, 6-13-2016]

Not many DUI stops result in attempts to locate the suspect's chastity belt key, but the May 14 sobriety checkpoint stop of Curtis Eidam, 35, in Clinton, Tennessee, did. Eidam was outfitted in "red mesh see-through hose," according to the police report, with a ribbon tied in his goatee, and also a "little skirt" (perhaps a tutu), when he told officers he needed his key, which happened to be on a necklace worn by his passenger (a "highly intoxicated" 44-year-old woman). Thus, Eidam was able to unlock and remove the chastity belt, which had been "attached to his penis." (There was also a handgun illegal in Tennessee for an intoxicated person to carry.) [Knoxville News Sentinel, 6-7-2016]

In a May journal article, biologists from the University of Florida and Oklahoma State University found that more than 80 percent of survey respondents want package labels on all foods that have "DNA" content (even though, yes, all meat and vegetables have DNA). The Oklahoma researcher found earlier that about the same number want such labels to be "mandatory." (Law professor Ilya Somin suggests playfully raising the fright level of those respondents by adding this "alarm" to the label they demand: "Warning: Pregnant women are at very high risk of passing on DNA to their children.") [Reason.com, 5-24-2016] [Washington Post, 5-27-2016] [Federation of American Societies for Experimental Biology, 5-18-2016]

Client Partners is only one of several Japanese agencies that supply rental "friends" to the lonely, for hours or days of companionship tailored to the needs of the socially challenged client (with two rules, however: "no romance," "no lending money"). A writer for AFAR travel magazine interviewed several "friends" in June, one of whom explained: "Japan is all about face. We don't know how to talk from the gut. We can't ask for help." Said the female "friend" (who offered a good-bye handshake to the interviewer): "There are many people who haven't been touched for years ... who start to cry when we shake hands with them." [AFAR.com via The Week, 6-26-2016]

Good Samaritan Derrick Deanda is facing a $143 bill from paramedics in Elk Grove, California, after he, passing a car crash, jumped out to pull out a man and his three children (including a 2-year-old), who were trapped in the wreckage. A short time later the paramedics arrived and, noticing that Deanda had a cut on his arm (from breaking the car's window to free the family), bandaged him. Elk Grove has a policy charging "all patients" at a first-responder site $143 for the "rescue," and Deanda received his bill in June. [KOVR-TV (Sacramento), 6-20-2016]

Not Ready for Prime Time: In May, a 16-year-old boy in Lakewood, Washington, not only used Facebook to set up a marijuana-dealer robbery (one of many people, lately, to incriminate themselves on social media), but during the robbery itself accidentally shot himself in the groin and femoral artery, requiring life-saving seven-hour surgery. [News Tribune (Tacoma), 5-2-2016]

Slaved Over a Hot Stove: Delivering gourmet meals to customers' doors is a fast-growing business model, but so far, only London's brand-new (as of 2012) Housebites goes the extra step. According to its press release, cited by Huffington Post, Housebites not only home-delivers "restaurant quality" cuisine (at the equivalent of about $20 per entree), but offers an optional dirty-pans service (about $8 extra), lending out the containers in which the food was prepared thus allowing clients to trick their dinner guests into believing the client actually prepared the meal. [Huffington Post, 6-14-2012]

More and more churches ("hundreds," according to a June Christianity Today report) offer hesitant parishioners a "money-back guarantee" if they tithe 10 percent (or more) of their income for 90 days -- but then feel that God blesses them insufficiently in return. The South Carolina megachurch NewSpring instituted such a program in the 1990s and claims that, of 7,000 recent pledgers, "fewer than 20" expressed dissatisfaction with the Lord. Advocates cite the Bible's Book of Malachi, quoting God himself (according to Christianity Today): "Test me in this." "Bring the whole tithe into the storehouse" and "see if I will not pour out so much blessing" that "there will not be room enough to store it." [Christianity Today, 6-28-2016]

A leading Chinese orthopedic surgeon continues to believe that "full-body" transplants are the next big thing in medicine, despite worldwide skepticism about both the science and the ethics. The plan for Dr. Ren Xiaoping of Harbin Medical University calls for removing both heads (the deceased donor's and the live recipient's), connecting the blood vessels, stabilizing the new neck, and "bath(ing)" spinal-cord nerve endings chemically so they will connect. (Critics say it is impossible to "connect" spinal-cord nerves.) According to a June New York Times dispatch, doctors regularly denounce China's ethical laxities (though Chinese officials term such denunciations "envy" at China's achievements). [New York Times, 6-11-2016]

In June, District Attorney Jerry Jones in Monroe, Louisiana, dropped drug and gun charges against college football players Cam Robinson and Hootie Jones (who play for University of Alabama but are from Monroe) --declaring that the "main reason" for his decision is that "I refuse to ruin the lives of two young men who have spent their adolescence and teenage years working and sweating, while we were all in the air conditioning." (2) A Philadelphia "casting" agency solicited "extras" to show up at polling stations on the April 26 Pennsylvania primary day for candidate Kevin Boyle, who was running against state Sen. John Sabatina -- offering $120 each (plus lunch and an open bar). Since most polling-site "electioneering" is illegal, the probable job was merely to give voters the impression that Boyle was very popular. (Sabatina narrowly won.) [Times-Picayune (New Orleans), 6-22- 2016] [Gawker.com, 4-27-2016]

In January, a Chicago Tribune investigation revealed only 124 of the roughly 12,000 Chicago cops were responsible for the misconduct complaints that resulted in settlements (since 2009)-- with one officer, for example, identified in seven. (A June Chicago Reporter study claimed the city paid out $263 million total on misconduct litigation during 2012-2015.) [Chicago Tribune, 1-29- 2016][Chicago Reporter, 6-22-2016]

Insurance agent John Wright filed a lawsuit in Will County, Illinois, in June over teenagers playing "ding dong ditch," in which kids ring a doorbell but run away before the resident answers. The lawsuit claims that bell-ringer Brennan Papp, 14, caused Wright "severe emotional distress, anxiety, and weight loss," resulting in at least $30,000 of lost income. (2) The ex-boyfriend of Nina Zgurskaya filed a lawsuit in Siberia after she broke up with him for his reluctance to "pop the question" after a two-year courtship. The man, not named in a dispatch from Moscow, demanded compensation for his dating expenses. The trial court ruled against him, but he is appealing. [Patch.com (Joliet, Illinois), 6-24-2016] [Daily Telegraph (London), 6-3-2016]

A team of researchers is following about 30 tabbies, calicos, and others, recording their moves and sounds, to somehow learn whether housecats have dialects in their meows and alter other patterns of stress and intonation when they "speak" to other cats or to humans. In explaining the project, linguist Robert Eklund (of Sweden's Linkoping University) personally sounded out "a pretty wide range of meows to illustrate his points," wrote a New York magazine interviewer in April. Eklund is already an expert on feline purring (at Purring.org) -- although from a distance, as he admits to being allergic to cats. [New York, 4-27-2016]

Quixotic Malaysian designer Moto Guo made a splash at Milan's fashion week in June when he sent model after model to the runway with facial blotches that suggested they had zits or skin conditions. One reporter was apparently convinced, concluding, "Each man and woman on the runway looked miserable." [Daily Mail (London), 6-20-2016]