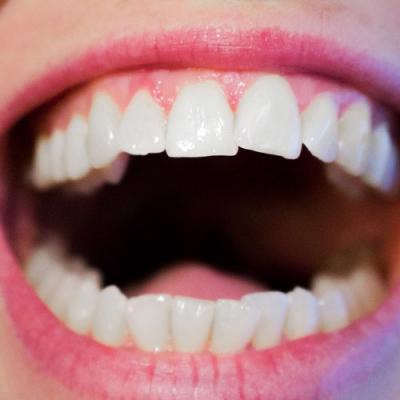 A San Francisco startup recently introduced a countertop gadget to squeeze fruit and vegetables for you so that your hands don't get sore. However, the Juicero (a) requires that the fruit and veggies be pre-sliced in precise sections conveniently available for purchase from the Juicero company, (b) has, for some reason, a Wi-Fi connection, and (c) sells for $399. (Bonus: Creator Jeff Dunn originally priced it at $699, but had to discount it after brutal shopper feedback. Double Bonus: Venture capitalists actually invested $120 million to develop the Juicero, anticipating frenzied consumer love.) [BBC News, 4-21-2017]

Monument to Flossing: Russian artist Mariana Shumkova is certainly doing her part for oral hygiene, publicly unveiling her St. Petersburg statuette of a frightening, malformed head displaying actual extracted human teeth, misaligned and populating holes in the face that represent the mouth and eyes. She told Pravda in April that "only (something with) a strong emotional impact" would make people think about tooth care. [Pravda, 4-12-2017]

Artist Lucy Gafford of Mobile, Alabama, has a flourishing audience of fans (exact numbers not revealed), reported AL.com in March, but lacking a formal "brick and mortar" gallery show, she must exhibit her estimated 400 pieces online only. Gafford, who has long hair, periodically flings loose, wet strands onto her shower wall and arranges them into designs, which she photographs and posts, at a rate of about one new creation a week since 2014. [AL.com (Mobile), 3-20-2017]

Though complete details were not available in news reports of the case, it is nonetheless clear that magistrates in Llandudno, Wales, had ordered several punishments in April for David Roberts, 50, including probation, a curfew, paying court costs, and, in the magistrates' words, that Roberts attend a "thinking skills" course. Roberts had overreacted to a speeding motorcyclist on a footpath by later installing a chest-high, barbed-wire line across the path that almost slashed another cyclist. (A search did not turn up "thinking skills" courses in Wales or in America, where they are certainly badly needed, even though successful classes of that type would surely make News of the Weird's job harder.) [Wales Online, 4-12-2017]

Raising a Hardy Generation: Preschoolers at the Elves and Fairies Woodland Nursery in Edmondsham, England, rough it all day long outside, using tools (even a saw!), burning wood, planting crops. Climbing ropes and rolling in the mud are also encouraged. Kids as young as age 2 grow and cook herbs and vegetables (incidentally absorbing "arithmetic" by measuring ingredients). In its most recent accreditation inspection, the nursery was judged "outstanding." [Metro News (London), 4-10-2017]

Criminal Defenses Unlikely to Succeed: (1) To protest a disorderly conduct charge in Sebastian, Florida, in March, Kristen Morrow, 37, and George Harris, 25 (who were so "active" under a blanket that bystanders complained), began screaming at a sheriff's deputy that Morrow is a "famous music talent" and that the couple are "with" the Illuminati. (The shadowy "Illuminati," if it exists, reputedly forbids associates to acknowledge that it exists.) Morrow and Harris were arrested. (2) Wesley Pettis, 24, charged with damaging 60 trees in West Jordan, Utah, in 2016, was ordered to probation and counseling in March, stemming from his defense that, well, the trees had hurt him "first." [WPLG-TV (Miami), 3-28-2017] [Salt Lake Tribune, 3-29-2017]

Legendary German Engineering: The state-of-the-art Berlin Brandenburg Airport, originally scheduled to open in 2012, has largely been "completed," but ubiquitous malfunctions have moved the opening back to at least 2020. Among the problems: cabling wrongly laid out; escalators too short; 4,000 doors incorrectly numbered; a chief planner who turned out to be an impostor; complete failure of the "futuristic" fire safety system, e.g., no smoke exhaust and no working alarms (provoking a suggested alternative to just hire 800 low-paid staff to walk around the airport and watch for fires). The initial $2.2 billion price tag is now $6.5 billion (and counting). [News.com.au (Sydney), 3-27-2017]

Why? Just ... Because: (1) The AquaGenie, subject of a current crowdfunding campaign, would be a $70 water bottle with Wi-Fi. Fill the bottle and enter your "water goals"; the app will alert you to various courses of action if you've insufficiently hydrated yourself. (2) Already on the market: A company called Blacksocks has introduced Calf Socks Classic With Plus a pair of socks with an internet connection. The smartphone app can help you color-match your socks and tell you, among other things, whether it's time to wash them. (Ten pairs, $189) [PR Web, 4-17-2017] [TechDigg.com, 4-27-2017]

Dark Day for Competitive Eating: A 42-year-old man choked to death on April 2 at a Voodoo Doughnut shop in Denver as he accepted the store's "Tex-Ass Challenge" to eat a half-pounder (equivalent of six regular donuts) in 80 seconds. Later the same day, in Fairfield, Connecticut, a 21-year-old college student died, three days after collapsing, choking, at a pancake-eating contest at the Sacred Heart University student center. [KUSA-TV. 4-3-2017] [Connecticut Post, 4-4-2017]