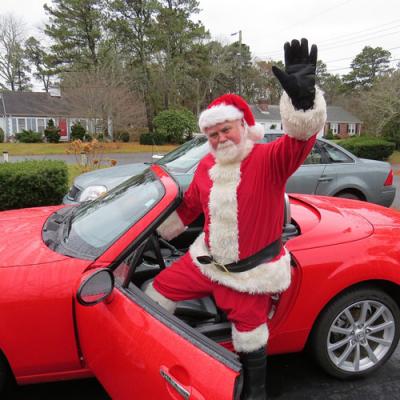 In New Hampshire on June 29, a state police officer stopped the 57-year-old driver of a Honda Odyssey minivan who had piled a Beverly Hillbillies-esque stack of belongings on top of his car. The collection, which was about as tall as the minivan, included a wooden chest, a bike, a floor lamp, a rake, a snow shovel, a moving dolly and a folding ladder, along with blankets and towels and a shopping cart full of items hanging off the back. Police cited the driver for negligent driving, and the car was towed away. [United Press International, 6/29/2017]

Sorry I Missed It

A Canada Day parade in southern Ontario sparked a flood of typically mild protests over Dave Szusz's float, which featured a 3-meter-tall blow-up Jesus (holding a baby sheep) and several real sheep. "I thought it was kind of sad to see sheep out with very loud blasting music, out in the heat in the city," said animal rights activist Dan MacDonald. Others flooded Szusz with complaints on Facebook. Szusz and MacDonald have since talked it out, although MacDonald still hopes Szusz will discontinue using sheep on his floats. [CTV News, 7/6/2017]

A repeat offender came to the end of his career when he and an accomplice tried to burglarize a home in East Macon, Georgia, on June 19. As James Robert Young, 41, a 35-time resident in the Bibb County jail, and another man zeroed in on her television, the homeowner woke up and heard them. "When she yelled, the men ran out," said Sheriff David Davis, and that was when the other suspect turned around and fired his weapon, striking Young in the head, killing him. The accomplice is still at large. [WMAZ, 6/20/2017]

Flower girls at weddings often steal the show, and Georgiana Arlt of Chaska, Minnesota, was no exception as she walked down the aisle on July 1. The 92-year-old grandmother of the bride, Abby Arlt, told her granddaughter the only other wedding she had been in was her own, when she was 20 years old. Abby had hoped to have her grandfather as the ring bearer, but he passed away last year. [KARE11, 7/3/2017]

What seemed like the best hide-and-seek idea ever took a frightening turn on July 6 in Colonial Heights, Virginia, when a 12-year-old girl became stuck in a sleeper sofa. Another child called 911 when she couldn't free her friend. "I've never seen anything like it," said fire chief A.G. Moore. "When she got out, she was fine." [FOX6, 7/6/2017]

In Green Bay, Wisconsin, a driver crossing the Walnut Street Bridge on June 22 disregarded the traffic arm and drove around it onto the drawbridge as it was opening. His van ascended the opening span, but then rolled back down into the gap between the stationary bridge and the moveable span. Green Bay Metro firefighters, concerned that the van might slip through the gap, cut a hole in its roof to rescue the driver. [The Associated Press, 6/23/2017]

Karen Leclair, 51, of Albion, Pennsylvania, was reported missing on June 11 by her commercial fisherman husband, Christopher, 48, after she went over the side of his boat on Lake Erie. Christopher told police he hadn't been watching when his wife fell overboard. When her body washed ashore on July 4 in upstate New York, however, she had a gunshot wound in her head, and she was bound by nylon fishing rope and weighted with an anchor. Christopher was charged with her murder after the gun used to shoot Karen was found under a bed in their home. [New York Post, 7/6/2017]

A monkey mystery unfolded near Mesa, Arizona, in early July as drone owner Jesse Sorensan dispatched his device over a facility rumored to house abandoned monkeys. "Hovered above it and took some pictures ... and sure enough there's monkeys in almost all the cages," said Sorensan. "What are these monkeys doing ... in the middle of the desert?" Local TV reporters looked into the mystery and found the facility is used for research and breeding for the University of Washington and the Centers for Disease Control, who were quick to point out that the monkeys have access to air conditioning and veterinary care. [3TV/CBS5, 7/5/2017]

Who You Gonna Call?

Villagers in the eastern Thailand province of Amnat Charoen have called in the Royal Thai Police Force to help rid them of an evil female spirit, "phi pob," they accuse of killing four cows and sickening four border police officers, reported the BBC in June. In Thai folklore, phi pob can possess people and sow chaos, including a 2016 incident in which neighbors were forced to strip naked at gunpoint by three reportedly possessed individuals. Adul Chaitprasithkul, the local police chief, noted, "More people believe in phi pob than those who don't." [BBC, 6/28/2017]

Police in Dearborn, Michigan, are hoping a thief's unusual loot may draw him back to the scene of the crime. Surveillance video at a Walgreens store captured a bald man making off with seven boxes of Rogaine, a hair-growth product, on June 22. "While this is not the most hair-raising crime ... it is suspected he will continue committing this type of crime, as 12 to 14 months of consistent use is needed to see results," Police Chief Ronald Haddad said in a news release. [Detroit Free Press, 6/29/2017]

What does ol' St. Nick do in the off-season? Perhaps look for a bail bondsman. In a dramatic chase, Maine State Police pursued a stolen car from Fairfield to Bangor on July 4, finally striking the vehicle and bringing it to a stop. When the driver was taken into custody, he identified himself as Santa Claus. But rest easy, boys and girls: Turns out he was Christos Kassaras, 54, from New Hampshire. [WMTW, 7/5/2017]

Residents of Baraboo, Wisconsin, must have done a double-take when they looked outside during the early hours of June 30. Kelly, a full-grown elephant, had escaped from the Circus World Museum nearby and wandered the neighborhood, munching on marigolds. Apparently, her partner, Isla (also an elephant), had used her trunk to free Kelly from a restraint. A trainer from Circus World was summoned, and Kelly was returned to her home at the museum. [The Associated Press, 6/30/2017]

Anger over spilled sugar led a Blue Springs, Missouri, grandfather to a chilly end when his grandson, Tyreik Baldwin, 21, allegedly killed Harvey C. Baldwin, 77, and stuffed him into a chest freezer. A family member who had become worried about the elder Baldwin visited the home on June 30, then called police after Tyreik hit him in the head with a hammer and drove off in the family member's truck. Police caught up with Tyreik as he tried to escape and took him into custody. [Kansas City Star, 7/5/2017]

by Nick Warren3/26/2020, 11:15 AM
The sensational Netflix documentary series is as wild as it sounds

All Welcome as Pride Preparations Get Underway

by Hannah McDonald6/20/2018, 1:00 PM
Members of Northwestern Pennsylvania Pride Alliance are gearing up for Erie's own Pridefest and parade.