This issue's focus may be making Erie weird, but let's stop short of human parrots, shall we? 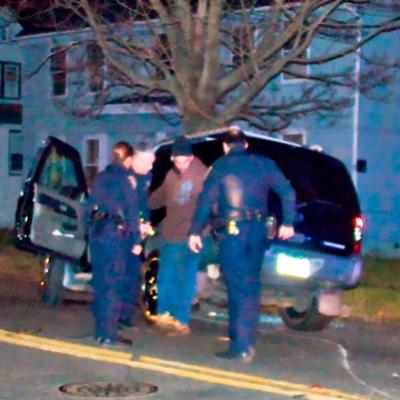 A 2015 decision of the Georgia Supreme Court has created a puzzle for drunk driver enforcement. In Georgia (and other states), blood alcohol tests are "voluntary" (to bypass the issue of whether drivers can be forced, or even pressured, to endure a test that ultimately helps to convict them), but the Georgia court has ruled, against custom, that a "consenting" driver might be "too" drunk to appreciate the consent -- in which case, the test results would be inadmissible in court. Equally awkwardly, prosecutors would be forced to argue that the drunk driver -- too drunk to handle a motor vehicle -- was still sober enough to give knowledgeable consent. Atlanta's WSB-TV reported in October that judges statewide are grappling with the issue. [WSB-TV, 10-29-2015]

Funerals and burials, in the United States and elsewhere, are no longer always so staid. Most famously, one man was, per his instructions, lowered to the ground inside his beloved Cadillac; dressing corpses in fanciful outfits (such as the Green Lantern) is not unheard of. In October, after Mr. Jomar Aguayo Collazo, 23, was killed in a shootout in San Juan, Puerto Rico, the family outfitted his body in his favorite blue tracksuit and propped him up at a table in his mother's tavern ("playing" dominoes and holding a drink and a condom) -- as friends and relatives passed by to pay their respects. [Fox News Latino, 10-21-2015]

The list of all-time extreme body modifiers would start with the late Dennis "Stalking Cat" Avner (who incrementally cut, chipped, tattooed, pierced and implanted his body to make himself a human feline) and the similarly obsessive Erik "Lizardman" Sprague, who at one time toured with the Jim Rose Circus. Newer to the scene is Britain's Ted Richards, 57, working to become a human parrot. With 110 colorful tattoos, 50 piercings and a split tongue, he currently seeks a surgeon to turn his nose into a beak. Even without the beak, though, Richard says becoming parrotlike "is the best thing that has happened to me." (London's Daily Telegraph, publishing astonishing photos of Richards, asked, rhetorically, whether we've reached "peak plastic surgery.") [Daily Telegraph, 10-16-2015]

Raised Right -- or Snitch-in-Training? In September, Audrey McColm, 25, traffic-stopped in Randolph County, Indiana, for driving "erratic(ally)," became the latest parent ratted out by her child. When Mom denied having been drinking, her daughter, 7, blurted out, "Yes, you have, Mom." McColm registered 0.237, had nearly hit another officer's car head-on, and was so hammered that she "urged" a different officer to "shoot her in the head." [Indianapolis Star, 9-18-2015]

A chapter of People for the Ethical Treatment of Animals undertook one of its favorite consciousness-raising tactics in August, demanding that Pennsylvania officials erect a roadside grave marker near Lancaster at the spot where a tractor-trailer hauling 80 pigs overturned, killing several of them. The "terrified animals" that suffered traumatic deaths should be memorialized by the community, PETA said. The pigs, of course, would have eventually found their way to a slaughterhouse, and it is possible that the ones euthanized as a result of the accident passed more peacefully than the "survivors." [Lancaster Online, 8-24-2015]

In October, The Washington Post and the New York Post separately reported recent episodes of government agencies keeping high-earning employees on the payroll for more than a year, with no job assignment, because the agencies were unable to adjudicate their misconduct cases. Almost 100 shelved Homeland Security employees turned up in a Washington Post Freedom of Information Act request, and one information technology analyst warehoused by the New York City employee pension fund said she had earned $1.3 million over 10 years doing absolutely no work for the city. "I watched movies," said Niki Murphy. "I crocheted -- right in front of (supervisors)." [Washington Post, 10-22-2015] [New York Post, 10-25-2015]

Drivers who blindly follow their vehicle's satellite navigation with disastrous results are almost No Longer Weird, but a truck driver's mishap in Ashton, England, in October still seemed worthy of reporting -- in that he was working for a company called Dachser Intelligent Logistics when his tractor-trailer got stuck in a narrow alley (directed there by the sat-nav, in violation of all common sense). (Bonus: It was not the first time sat-nav had misdirected a vehicle into the same alley; the town had even placed a formal traffic sign at the approach to the alley: "Do Not Follow Sat Nav Next Left.") [Manchester Evening News, 10-19-2015]

In October, the federal government finally unloaded the two New Hampshire properties it seized in 2007 from dentist Elaine Brown and her husband (after a nine-month standoff following their vow to die rather than pay their back taxes to the IRS). Their 100-acre "compound" became a magnet at the time for an array of "sovereigns" and tax-resisters, who were rumored to have booby-trapped the property to ward off law enforcement -- and the 2015 auction only partially guaranteed that the property was free of hidden explosives. (News of the Weird's 2007 story included Dr. Brown as one of three U.S. dentists who, independent of each other, had become obsessed about federal taxes. The Browns are serving 30-year prison terms.) [WCVB-TV (Boston), 10-22-2015]

High school principal George Kenney believes he has a gift to aid students' concentration abilities -- hypnotism -- and practiced it extensively at North Port High in Sarasota, Florida, until 2011, when three of his students died in separate incidents (two by suicide). While Kenney enjoys retirement in North Carolina, the Sarasota school board did not close the chapter until October 2015 when it granted $200,000 settlements to the families of the three students. The lawsuits complained of Kenney's unlicensed "medical procedure," which altered the "underdeveloped" teenage brain -- but Kenney had also pointed to improvements in studying by other students. [Herald-Tribune, 10-6-2015]