No more "Tag" or "Rover Red Rover." But apparently you can still pray yourself out of a crime. 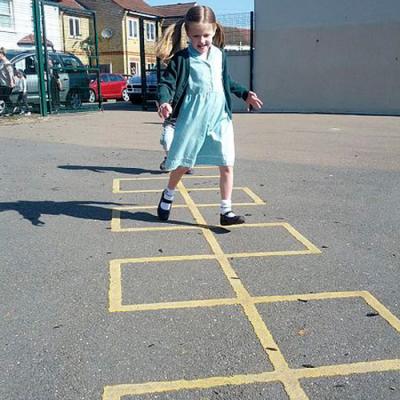 Two suburban Minneapolis elementary schools this fall hired a consulting firm to advise officials on kids' recess, and the leading recommendations (promoting "safety" and "inclusiveness") were elimination of "contact" games in favor of, for example, hopscotch. Some parents objected; recess, they said, should be more freestyle, unstructured. (More consultants' advice: De-emphasize refereed "rules" games in favor of monitors who simply praise effort.) One Minnesota principal noted improvement -- fewer fights and nurse visits now -- but as one parent said, her child feels that recess is no longer really "playing." [Star Tribune, 10-5-2015] [Mercer Island Reporter, 9-24-2015]

Unapparent Problem, Solved: Vladimir Laurent (an insurance executive in Coral Springs, Florida) received his U.S. patent on Sept. 29 and can proceed mass-producing "The Shield" -- his brainstorm to keep men's genitalia from dragging on the inside of toilet bowls while they're seated. Laurent told the South Florida Business Journal that his device was something he "needed, personally" (though he's aware that not all males experience the sensation). The Shield is basically a cup attached to the bowl by suction that allows movement via a ball-and-socket joint. [South Florida Business Journal, 9-30-2015]

Kentucky's government ethics law bars gifts from lobbyists to legislators, but state Sen. John Schickel filed a federal lawsuit in September claiming that he has a constitutional (First Amendment) right to receive them. (The laws were passed after the FBI found several Kentucky politicians selling their votes.) And in May, officials of the American Gaming (gambling) Association and the Association of Club Executives complained to the Pentagon that a threatened prohibition of the use of government credit cards at casinos and strip clubs violated card users' constitutional rights, in that protected activities (such as business strategy meetings) take place at those venues. [TheIntercept.com, 9-24-2015] [Government Executive, 5-21-2015]

Florida Justice: Orville "Lee" Wollard, now 60, was convicted of aggravated assault in 2008 after he fired one "warning shot" into a wall of his home during an argument with his daughter's boyfriend. Believing his shot defused a dangerous situation (the boyfriend had once angrily ripped sutures from Wollard's stomach), Wollard had declined a plea offer of probation and gone to trial, where he lost and faced a law written with a 20-year minimum sentence. Florida has since amended the law to give judges discretion about the crime and the sentence, but Gov. Rick Scott and the state's clemency board have refused to help Wollard, who must serve 13 more years for a crime he perhaps would not even be charged with today. [Miami Herald, 9-30-2015]

Christopher Hiscock, 33, got only a year's probation after his guilty plea for trespassing on a ranch in Kamloops, British Columbia, in September -- because it was a trespass with panache. Since no one had been home, Hiscock fed the cats, prepared a meal, shaved and showered, took meat out of the freezer to thaw, made some coffee, started a fire in the fireplace, did some laundry, put out hay for the horses, and even wrote some touchingly personal notes in the resident's diary ("Today was my first full day at the ranch." "I have to remind myself to just relax and take my time.") In court, he apologized. "I made a lot of mistakes." "Beautiful ranch. Gorgeous. I was driving (by) and I just turned in. Beautiful place." [Kamloops This Week via National Post, 9-30-2015]New! Amazing! Awesome!

Low-benefit (but Internet-connected!) devices now on sale (from February MacLife magazine): HAPIfork (Bluetooth-connected, alerts you if you're eating too fast); iKettle (heat water at different temperatures for different drinks, controlled by phone); an LG washing machine that lets you start washing while away (provided, of course, that you've already loaded the washer); Kolibree "smart toothbrush" (tracks and graphs "brushing habits"). Also highlighted was the Satis "smart toilet," which remotely flushes, raises and lowers the seat, and engages the bidet -- features MacLife touts mainly as good for "terrorizing guests." [MacLife, February 2015]

Scientists have somehow determined that rats dream about where they want to go in the future. Dr. Hugo Spiers of University College London (and colleagues) inferred as much in a recent eLife article based on how neurons in the rodent brain's hippocampus fire up in certain patterns. They discovered similar patterns when a rat is asleep just before conquering a food "maze" as when he awakens and actually gets to the food (as if it plotted by dream). (Buried Lede: Rats have dreams.) [New Scientist, 6-26-2015]

The Power of Prayer: (1) Two men with handguns walked through an open door of a Philadelphia home in July and demanded drugs and cash from the three women inside, threatening pistol-whippings. According to a Philly.com report, a 55-year-old woman in the home immediately burst into loud prayer, causing the gunmen to flee empty-handed. (2) Police in Bellevue, Ohio, initially believed that texting behind the wheel was what caused Marilyn Perry, 62, to crash and badly injure another driver. However, in July, she and her lawyer convinced a judge that she was "looking down" as she drove only because she was praying over "personal problems." [Philly.com, 7-12-2015] [WJW-TV (Cleveland), 7-21-2015]

A year-long investigation by GlobalPost revealed in September that at least five U.S. or European Catholic priests disciplined for sex abuse have surfaced in South America, ministering unstigmatized in impoverished parishes. In Paraguay, Ecuador and Peru (all with softer law enforcement and media scrutiny than in the U.S., and where priests enjoy greater respect), dioceses have accepted notorious priests from Scranton, Pennsylvania, Minneapolis and Jackson, Mississippi, and Catholic facilities in Brazil and Colombia now employ shamed sex-abusers from Belgium and San Antonio, Texas. (The Belgian priest had been allowed to start an orphanage for street kids.) GlobalPost claims the Vatican declined "repeated" phone calls for comment. [GlobalPost via USA Today, 9-17- 2015]