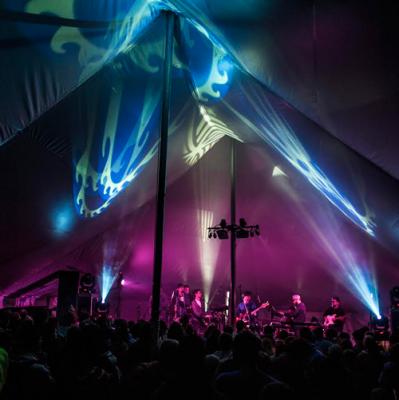 I've said it a few times now to a few different people: If I had to pick one and only one summer music festival to attend, it would be the one happening in Sherman, N.Y. at the beginning of fall.

Thank goodness, I didn't have to make that kind of decision. But if I were to have had to, I probably would of gladly stuck by the Night Lights Fall Music Festival – out of all the others, big and small, around the region – as my go-to one.

Well, because it seems that the festival – Sept. 11 and 12 – is going to be truly, truly amazing, both sonically and socially: A music-and-light-driven, cozy gathering of somewhere around 1,500 groove-minded people, nestled on the same legendary, lush, beautiful-wooded grounds the Great Blue Heron Music Festival has made its home for nearly a quarter-century.

And oh yeah, Night Lights features live performances from prolific, fun, great-to-see-live (and just great) artists RJD2, Marco Benevento, the Werks, and a slew of other top-shelf, genre-blending performers from all over the region and beyond, including Aqueous, Smackdab, Jimkata, Lazlo Hollyfeld, Broccoli Samurai, and more.

Beyond all that serious ear candy, there's the eye-popping extravaganza of light that gives Night Lights its name: A mile-long display (the brainchild of light artist Doug Sitler) illuminating the festival grounds' woodlands.

For a music-and-camping festival fan such as myself, that all sounds like a just-about-perfect way to spend a weekend.

Having originally started as just a series of small, random gatherings – just parties, really – at that gorgeous Chautauqua County locale, Night Lights has been especially soaring the past couple of years, bringing in high-caliber live acts like Grammy Award-winning Snarky Puppy, Benevento, Dopapod, and Turkuaz, just to name a few.

"This is year five we're coming up on now," Scott Molloy, one of Night Lights' chief creators and organizers, told me during a recent phone chat. "It was sort  of a random start," he added, but "it's really taken off from there."

"We try to really focus on the quality and the diversity of the music," Molloy said – and it shows.

And, as far as the light installation and other aesthetic elements, Sitler and other in-house artists "go pretty, pretty insane with taking over the woods," he said with a laugh.

Look and sound good? Then Night Lights is where you'll want to find yourself saying goodnight to summer. – Ryan Smith