Nitro Circus Much Too Extreme for the Big Top

The stakes are high and the stunts soar even higher in Travis Pastrana's Nitro Circus. 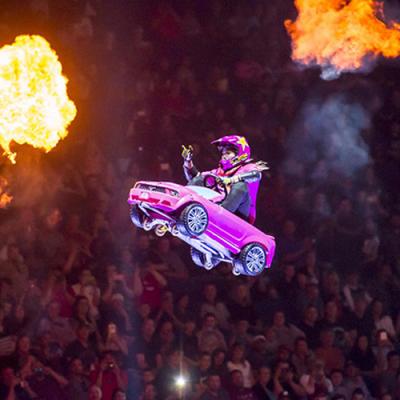 One flip. Two flip. Better stick the landing or else it's a black-and-blue/you're-screwed flip.

The stakes are high and the stunts soar even higher in Travis Pastrana's Nitro Circus, which gives the world of action sports a gratuitous fuel injection (and never far away from an open flame jet). The Maryland-based Nitro Circus has been on tour since 2010, gradually (and literally) ramping up the intensity from year-to-year and even show-to-show, to a level verging on insanity.

There is tremendous entertainment value in insanity, however, and its launchpad is the 40-foot Giganta-Ramp. The physics of it create the hang time to perform some unthinkable maneuvers; the imagination of the performers escalates the spectacle that much further. Not only will you see the more traditional BMX and motocross bikes, inline skates and skateboards, you'll also see what the gang refers to as "contraptions." In the past, contraptions have included everything from kayaks to rocking horses (mounted on sleds) to Barbie Jeeps to recliners (just in case any of their exes ask you where their furniture went). Anything that can fly off the end of the ramp inevitably does.

This is all much too extreme to fit under a big top, which is why the Lake Erie Speedway is ever-so-graciously hosting the event. Remember, kids, there's nothing you can't do. Just make sure you have insurance first. — Matt Swanseger