by Ryan Smith
View ProfileTwitterRSS Feed
September 4, 2013 at 7:00 AM 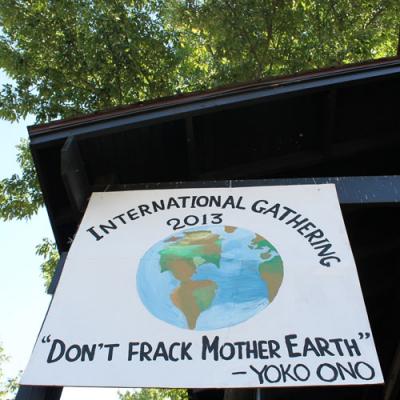 She didn't even know what fracking was when she first started getting seriously, dreadfully ill.

It wasn't long after moving into a back-country home in northeastern Ohio around four years ago, Frederick said, that the sickness – like "a never-ending intestinal flu" – showed up, and stayed, and got worse as time went on, causing chronic pain, vomiting, infection, and other problems.

Through it all, using her own common sense, she kept drinking plenty of water.

Some of the 20 or so doctors Frederick saw (all at a loss to correctly diagnose her problem) over the course of a couple years even told her she was likely just dehydrated and should drink even more water. So she did – up to two gallons of it a day, unfiltered, from taps fed by her home's well. But she sure didn't get better.

Frederick still didn't know why she was so sick, or much of anything about fracking and the controversial practices by which the work of extracting natural gas from deep within the earth is being done. But a few months before the start of 2012, when convoys of heavy trucks and drilling equipment started showing up not far from her front door, she said her understanding became more clear.

It turned out a non-local, neighboring property owner had leased dozens of acres for gas drilling before she had ever moved in and soon found that several wells had already been drilled nearby. So, Frederick had her well water tested. What was found, she said, was definitely enough to make her stop drinking it: A high-level slew of toxic contaminants – barium, strontium, toluene, and others – all of which have been found to be common pollutants in many areas where drilling is occurring.

She's since slowly begun showing signs of improvement. But the drilling – and the wellspring of problems Frederick and many others claim comes with it – has continued on.

"I was pretty pissed then. And I'm still pretty pissed," Frederick, voice quivering, told a crowd of like-minded people gathered at the first annual No Fracking Way America International Gathering at Nelson Ledges Quarry Park in Garrettsville, Ohio. "I can't afford to walk away. But even if I could, why the f—- should I?!"

Frederick, who's been speaking out against fracking since her experience, shared her story in front of hundreds of activists and others attending the No Fracking Way gathering, which also featured speakers, live music, informational tents and tables, arts and crafts, and more, in the idyllic, pristine waters-flanked setting that is Nelson Ledges.

When I got there Saturday night, the main stage area's crowd was thinner, a hundred-plus or so, but their cheers for organizers/musicians Uncle Eddy & Robin – longtime activists from West Virginia – and others on stage was hearty, and the words shared by Frederick and others were more than heartfelt.

"This movement is gaining momentum," said another speaker, Doug Shields, the former Pittsburgh city councilman who in 2010 introduced legislation that's led to a still-active moratorium on natural gas drilling activity in the city.

"We took a long, hard look, and found this industry to be lacking in so many ways," Shields said. And "people there, like yourselves, decided this is an important matter [that's] for the public to decide," he said. When it comes to the right to make informed decisions as drilling proceeds elsewhere throughout the region, "it is time for us to take back that which is ours," he said.

Increasingly, as demonstrated by an ever-deepening-and-widening discussion on the issue, "we're winning" back that right, said Shields. And, he added, "that scares the hell" out of those who'd perhaps prefer certain voices keep quiet under the din of the drills' progress. "I have friends on both sides" of the fracking debate, and, one way or the other, "these people are passionate" about their stances, said Kelley McGregor, a Butler resident attending the NLQP gathering.

"I'm just here to learn," McGregor said, to gain a fuller, rounded understanding of the issue.

And that's the kind of active, critical, common-sense thinking that movement-leaders like Ed and Robin Mahonen and Shields say needs to be tapped, as deeply as possible, in communities where fracking's already made its marks, and the places where the drills may be going next.

We hope we don't have to come back here next year to show where those against the industry and its practices are coming from, Robin Mahonen added, but we'll be happy to gather again there – and elsewhere – as long as those voices still need to be heard.