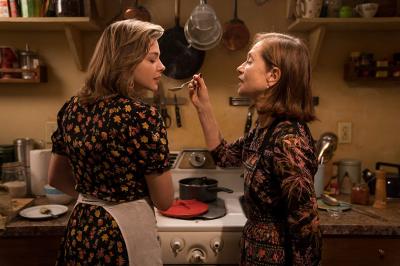 Neil Jordan's (The Crying Game, Interview with the Vampire) new film Greta is an odd duck. It is as silly, illogical, and melodramatic as an entire year's worth of Lifetime movies of the week, and yet I was oddly drawn into the film's twisted, nonsensical world. The film manages to take a B-movie premise and turn it into A-movie material thanks mainly to some clever cinematography and one master performer having as much fun with her role as she can.

The story follows Frances (Chloe Grace Moretz), a young woman who has recently moved to New York City after the death of her mother. She finds a handbag left on the seat of a subway train and decides to return it to its owner, a lonely older woman named Greta (Isabelle Huppert). Frances and Greta have an immediate connection and begin spending more time together, but it is slowly revealed that Greta is not all that she seems.

The film is beautifully shot, with ingenious camerawork that elevates it above its made-for-TV movie story. Also, Huppert has a lot of fun in her role as the titular character and somehow manages to rise above the film's most ridiculous scenes and dialogue. That being said, the dialogue is often goofy and the story meanders and features insane leaps of logic in order to get us to the third act. I'm not complaining, though,  because that final act when the film finally lets its hair down and becomes the camp spectacle it was always meant to be is worth everything that came before. Greta is not a good movie (in fact, it is often quite bad), but it's so earnest in its silliness that it is just impossible to hate. — Forest Taylor