Revival of the Picnic in the Park Series 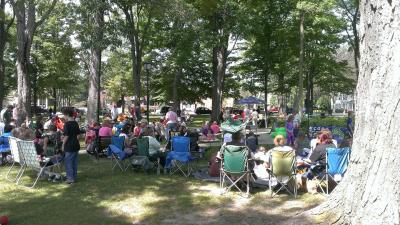 For those lucky enough to still have them, summer vacations imply hours upon hours to fill — children exulting in unison as their parents collectively shudder. Starting June 13, however, that energy can be confidently directed toward North East's Gibson Park (for three hours, at least). That's because North East Area Chamber of Commerce and North East Arts Council are reviving their Picnic in the Park program for the season.

Each of the nine installments will feature concessions and kid-friendly entertainment in an oasis of natural shade —effectively preserving your fuse from any sun, sons, and/or daughters. The Rusty Wheel, a North East dining operation with both fixed and mobile locations, will provide lunch for this year's first picnic. Their chicken and waffles are a well-regarded Southern comfort among Northeasters. Marty's Bubblegum Machine, an interactive music show hosted by Marty Loomis, will be on hand to preoccupy the youngsters. — Matt Swanseger

The series continues each Thursday through August 15 (excepting July 4):