None of the Above

by Cory Vaillancourt
View ProfileFacebookTwitterGoogle+RSS Feed
October 30, 2013 at 7:00 AM 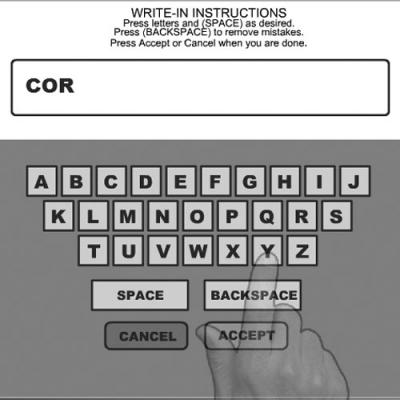 You know who the candidates are; their names are right there, on the electronic ballot.

But beneath their names, there's a mysterious little button many people never notice, and never press.

Sure, the occasional snarky malcontent may use the "Write-in" button to vote for Mickey Mouse, Napoleon Bonerparty, or Mike Rotch, but most people don't know that in nearly every election, write-in candidates, although rare, are often out there working for your vote even though – for whatever reason – they don't actually appear on the ballot.

The other day, I walked in to my office only to find Whaley having a spirited conversation with Erie Reader Managing Editor Ben Speggen. Whaley paused, turned to me, introduced himself, and said, "I'm running for mayor."

"How long have you been running for mayor?" I asked.

"About five minutes," he deadpanned.

Although this registered Republican – and former chief of staff to current Erie Mayor Joe Sinnott – wasn't serious, he wasn't far from the truth. He didn't run in the Republican Primary this past spring, and had only just declared his intentions to the media. Accordingly, his name won't be on the Nov. 5 ballot.

Then there's Lisa Austin. At first, she was declared the winner of the Democratic Primary for Erie County Council District 2 but then lost to Andre Horton by 10 votes after an entire precinct was mistakenly omitted from the initial results. Republican Ned Smith won his primary. Horton and Smith are on the ballot. Austin is not.

But that doesn't mean that Austin isn't a candidate. She's been working as hard, if not harder than, a lot of candidates on the ballot, waging a vigorous ground campaign since late July.

The same goes for Whaley. He made a major splash in local media as well as on social media and is working to spread his message virally in the last few days before the election.

Unfortunately for Austin and Whaley, the odds are stacked against them. Although write-in campaigns can be successful (John F. Kennedy wasn't on the Pennsylvania presidential primary ballot in 1960 but won nonetheless) coaxing voters to press that mysterious little button adds an extra step to an already-difficult process.

"The voter walks into the polling station and looks at a screen with one name [Joe Sinnott] on it and a blank space underneath. You are asking the public to do some work for you and that's hard," said Whaley, who is running due to what he calls "real dissatisfaction" with the state of affairs in Erie, citing poverty, crime, rising taxes, a diminishing tax base, population and business exodus, lack of entrepreneurship, potholes, cronyism, the old boy network, a lack of change, and the McBride Street viaduct. "I think many people vote straight ticket and that leaves out the write-in. Plus, many people just seem to have this weird feeling about the process in general."

"Most of us like to do what is familiar," Austin said of the difficulties associated in convincing voters to take that extra step. "A write-in is inherently unfamiliar. Voters must select 'View Ballot,' find the County Council race; ignore the two listed candidates [Horton and Smith], select "WRITE IN," type " L I S A   A U S T I N ," and select 'accept.'

To combat that difficulty, Austin and Whaley are taking extra steps to ensure voters are aware they have a choice that is not on the ballot. "To make writing in more familiar, volunteers are toting 'Write-in Lisa Austin' pencils all over District 2 to make the idea familiar," Austin said. "We are calling, knocking on doors, putting out signs, running some ads, using social media, and sending out information on the easy steps to 'Write-in Lisa Austin.'"

Whaley's working in a similar fashion, meeting as many people as he can, emailing, blogging, tweeting, and posting on Facebook. "I hope that all of those folks in turn retweet and repost to help spread the word," he said.

But can Austin and Whaley count on enough people taking the extra step and pushing that mysterious little button that most people never notice, and never press? Can they win?

"Yes I can," agreed Austin. "Remember that despite having four familiar names on the ballot, almost a thousand Democrats already chose to vote for me in the primary. It is clear that District 2 voters - across party lines - want to elect someone with a track record of effective, local leadership: me."