Drive through Downtown North East and you are bound to notice that the town takes its appearance seriously. 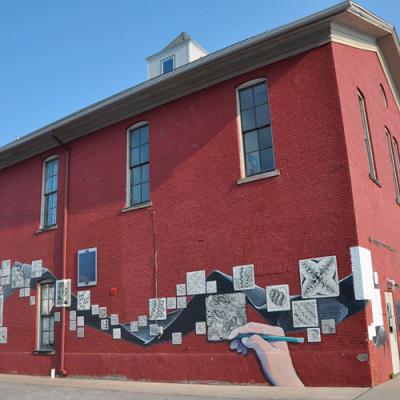 Drive through Downtown North East and you are bound to notice that the town takes its appearance seriously. Much of the added bling that perks up the small-town ambience is homegrown.

The most recent addition is the Mindful Mural. A brainchild of Christine French, the design incorporates square, high-contrast mandala drawings from 51 students who took classes in yoga and Zentangle at the North East Arts Council. French and Deb Phillips used this opportunity to introduce community members to the arts of Zentangle and Yoga as meditative practices available to anyone.

The mural was made possible by a grant from Erie Arts and Culture. That grant was written by French along with Rebecca Weinheimer and Phillips. Mural master Ehren Knapp was recruited to help with the layout and he completed the installation of the mural. He is well-known for his murals throughout the Erie area, including the mural that graces the west wall of The Cork 1794 restaurant in North East.