Have you entered the Perry Burns contest yet?

by Cory Vaillancourt
View ProfileFacebookTwitterGoogle+RSS Feed
July 31, 2013 at 9:58 AM 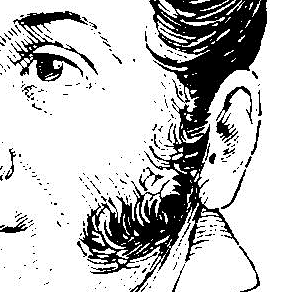 I guess I'm a beardo at heart. Sure, I only had a beard one time for 3 months over a decade ago, but that was when I lived in in Colorado – where beards are mandatory; also mandatory in Colorado are dogs and bandanas, and if you have neither, the state will issue you with a dog, or a bandana, or a dog with a bandana. But I digress.

Beards are cool; however mine was not. Being a blondish-brown haired Caucasian, my beard looked like Chuck Norris' would have if he ate a bowl of Creepy-O's for breakfast. Every day. For 25 years. So, when I came down off the mountain, I had no problems freeing myself of the itchy, creepy facepelt.

Perry's chops played a significant role in the Battle of Lake Erie.

That's not to say that I don't admire beards. And men with beards. I hope to have one myself one day – a beard, not a man. Don't judge. However, as I'm rapidly greying and watching my stubble span the spectrum from blond to brown to straight white, I've resigned myself to waiting until I go completely grey to grow a dignified Vanco-esque beard, half Santa, half Gandolf.

But in the meantime, there's always sideburns. Thick, luxurious sideburns, like those of our revered naval hero Commodore Oliver Hazard Perry. Not quite a beard, but no less commanding, Perry's chops played a significant role in the Battle of Lake Erie, as their fearsome, fearless glory could be seen miles away and intimidated the dastardly British into surrendering before a single shot was fired, just so they could be closer to those magnificent chops [citation needed].

So, if you're not already sporting a set, you'd better get crackin' – because you could win a prize for your favorite local charity! As I'm sure you know, the Perry 200 Commemoration's "Perry Burns" contest, which was launched July 1, is nearing its conclusion; the deadline to submit a photo of your Perry-esque burns at www.goerie.com/perryburns is tomorrow at 11:59 p.m. But don't worry if you miss it – you can always enter the next one, which takes place at the Perry 250 Commemoration in 2062.