On Rented Time With Between Riverside and Crazy 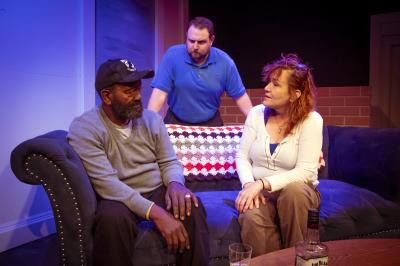 Dave Schreoder / PACA
Stephen Adly Guirgis' Between the Riverside and Crazy was awarded a Pulitzer Prize in 2015 for its darkly comical confrontation of race and class issues and matters of life and death. The PACA production stars Collis Allen Jr. (left), Jordan T. Gilmore, and Char Newport.

With strict limits on how much landlords can raise prices, New York City's rent-controlled apartments are an exceptional rarity in the 21st century — the apartment building has to have been built prior to 1947, and the resident has to have lived there continuously since before 1971.

In Manhattan, where people pay a premium to squeeze into a shoebox, a spacious rent-controlled apartment would make an enviable prize. But on Riverside Drive, home to the borough's most coveted properties? You'd go just about crazy to get one, and you'd certainly be crazy to let one go.

Between Riverside and Crazy is exactly where retired NYPD officer Walter "Pops" Washington finds himself in Stephen Adly Guirgis' aptly-titled play. With greedy landlords breathing down his neck and an assortment of colorful (and at times sketchy) characters crowding his space, Pops remains stubbornly resolute — he's not going anywhere if he can help it.

However, his discrimination lawsuit against the NYPD is still pending a full eight years after another officer shot him out-of-uniform and off-duty. Meanwhile, Pops' recently paroled son Junior has just moved back into his apartment and his life, with girlfriend Lulu and recovering addict Oswaldo often accompanying. Others pop in and out, and their intentions aren't always clear or pure.

But such is the way of the typical Guirgis play, which consistently delight in moral contradiction and conflicted characters — morbidly humorous but with an undeniable undercurrent of humanity. This theatrical blend won Between Riverside and Crazy a 2015 Pulitzer Prize, as well as the 2015 New York Drama Critics Circle Award for Best Play. The Pulitzer committee summarized: "nuanced, beautifully written play about a retired officer faced with eviction that uses dark comedy to confront questions of life and death."

This is all par for the course for a PACA (Performing Artists Collective Alliance) production, wherein audiences are often pushed to both think and feel as they watch the action unfold onstage. PACA's interpretation of Riverside is directed by JR Fabin and stars Collis Allen Jr., Gabriel Martinez, Alex Staley, Alycia Oliver, Char Newport, Jordan T. Gilmore, and Jennifer N. Perry.

We highly recommend signing the lease agreement on this one. — Matt Swanseger