On The Beach, Off The Grid 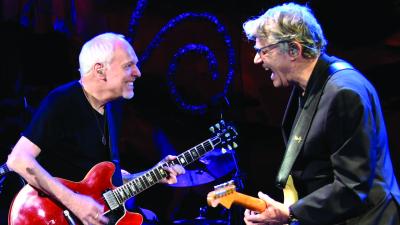 This is a story, about 2014 and 2-0-1-2 — two beach concerts, with little room left to improve. "Going into this year, we knew that topping the previous two concerts [Steely Dan four years ago and Crosby, Stills, and Nash two years prior to that] was going to be a challenge. So when the opportunity to book two rock-'n'-roll legends presented itself, it was obvious that Peter Frampton and Steve Miller Band together could easily meet or exceed the expectations of our guests," said Jon DeMarco, Presque Isle Partnership executive director and organizer of Best Summer Nights.

Best Summer Night 2018, like the two events before it, will take place on Beach 11 at Presque Isle State Park, with all the proceeds benefiting the Presque Isle Partnership, whose mission is "to enhance the visitor experience while protecting the natural environment." While DeMarco concedes that attendees might pay significantly less at the more typical amphitheater or arena, he argues "the atmosphere at Beach 11 delivers so much more … toes in the sand, [being] under the stars and at the water's edge." Bringing that experience to fruition is no easy feat, as an entire venue must be "created from scratch in a way that is practical and economical." Unique accessibility and logistical challenges also come with inviting an arena audience (and the traffic) to the peninsula, so organizers hope that attendees will carpool and utilize the shuttles provided before and after the performances.

In the off chance you haven't gotten to know the performers, let me show you the way (just in case) to acquaint yourselves. Both Peter Frampton and Steve Miller are proficient guitarists who broke through in the late '60s, becoming veritable hit factories throughout the '70s and staples of classic rock radio today. Frampton, a former teen idol and a native of Kent, England, achieved mass appeal through a combination of good looks, tight songwriting, and use of the talk box (an effects pedal with an attached plastic tube, allowing the performer to shape instrument tones into "words") — a fixture in some of his most recognizable tunes, including "Do You Feel Like We Do" and "Show Me The Way." Miller was a Bay Area bluesman-turned-pop sensation with the Steve Miller Band, his songs laden with irresistible hooks and a winking, often self-referential sense of humor. A sampling of hits you'll hear include: "Rock'n Me" "Fly Like An Eagle," "Take The Money And Run," "The Joker," "Jet Airliner," and "Abracadabra."

You'll want to "reach out and grab ya" self a ticket to this rare and unique concert event while supplies last. Parking is first come, first served with VIP ticketholders getting dibs on the nearer parking areas (Beach 11 and 10). No alcohol/tailgating, chairs, cameras, coolers, or backpacks are permitted on-site (lest you be "tied to the stake"). Join DeMarco in helping to leave "the park in a better condition than when we arrived." — Matt Swanseger