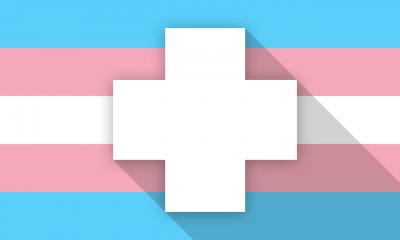 When is the last time you went to the doctor for a minor ailment and were told "I'm sorry, I don't know how to treat you," or "We don't treat 'people like you' here." Sounds far-fetched, doesn't it? I mean, what doctor in their right mind would treat a patient so badly, or not treat them at all? Well, the truth is that it does happen, but generally only to those people who identify as transgender or gender non-conforming. Transgender people have been making the news a lot more in recent years, but most of the buzz has been around bathroom usage instead of real problems like equal access to employment, to housing, and to culturally competent medical care.

The same has historically been true of patients who identify as gay or lesbian; however, the medical needs of transgender patients may exceed those of gays and lesbians. It is important to note here that all people have a sexual identity AND a gender identity, but these two aspects of our identity are completely independent of each other. As a result, a transgender person may have specialized needs due to their gender identity as well as their sexual orientation, whereas a gay person will generally only have concerns around sexual identity.

For the uninitiated, transgender means that a person's internal sense of their own gender does not match the sex they were assigned at birth, meaning a person may be assigned male at birth based upon anatomical characteristics, however as they grow into adolescence, they do not necessarily "feel" male. The opposite of this is cisgender, which means that the sex assigned at birth and the person's self-realized sense of their own gender are in alignment. Put simply, if you do not identify as transgender, you are cisgender.

Gender Non-conforming, on the other hand, means that a person does not conform to societal expectations of gender. You may have heard other terms applied to this population, including gender variant, genderqueer, or gender expansive, among others. A gender non-conforming person may not identify as male OR female, or they may identify as both. A person may feel more male than female one day and express themselves as such through their clothing, behaviors, and other outward expressions, then present as female the next, or they may express themselves through some combination of male and female at the same time.

As a lay person, you may say "I don't see what difference this makes. An injury or illness is the same whether you are transgender or cisgender," and in most cases you would be correct. I mean, biology is biology, right? However, when it comes to medical care of transgender people, there are some very important things to take note of.

The first is that transgender people do require some variations on care that their cisgender counterparts do not, such as the possibility that they may be taking cross-sex hormones to create physical changes that over time will result in a shift from one sex to the other. This can present medical professionals with some challenges that are easy to overcome if a provider is culturally and professionally aware. For example, you may have a trans man (assigned female at birth but identifies as male) who, because they have not had any surgical procedures done to alter their sexual organ, still require pap smears and who may still become pregnant. Alternatively, a trans woman may still require prostate exams.

In addition to the medical knowledge required to properly treat transgender people, medical professionals must recognize and deal with their own biases in relation to sexual and gender minorities. Doctors, like anyone else, have upbringings and social factors that can affect how they see the world and the people in it. One would hope that a doctor is free of such biases and is willing to treat every patient equally, but this is not always the case.

In fact, according to the 2015 U.S. Trans Survey, with a total of 27,715 respondents from all 50 states, transgender people face several barriers to accessing quality and appropriate health care, including problems with insurance, adverse experiences with providers, and fear of experiencing discrimination:

One in four (25 percent) respondents experienced a problem with their insurance in the past year related to being transgender, such as being denied coverage for care related to gender transition.

While more than three-quarters (78 percent) of respondents wanted hormone therapy related to gender transition, only 49 percent had ever received it.

So, what is the primary reason for this lack of appropriate skills and cultural competency? Transgender and LGBTQ health care is rarely, if ever, taught in medical schools. Contrary to the beliefs of many, transgender people have been around as long as there have been…well…people. Unfortunately, it is only in the last 10 years or so that our Western culture has reached the point where it is possible for transgender people to be out and open about their gender identity. I say "Western culture" because, historically, many other cultures have held transgender people in high regard. In some cultures, transgender people have been priests and shamans because they transcend normal male/female roles and expectations. Some medical schools are starting to take notice, but with roughly 890,000 doctors already in practice in the U.S. alone, there is a lot of catching up to do.

While a recent small study shows that 86 percent of doctors surveyed stated they were willing to provide routine care to transgender people and 79 percent were willing to provide pap smears to transgender men, the vast majority reported a lack of familiarity with transgender transition guidelines, lack of training in transgender-specific care, lack of exposure to transgender patients, and lack of knowledge about transgender patients among office staff, medical assistants, and nursing staff. It is important to note that the survey was sent to only 308 internal medicine and family practice doctors, and only 140 of them responded. Dr. Janelle Downing of the University of South Carolina, who was not involved in the study, noted that the number of doctors who declined to respond shows that the responses are likely an overreport of willingness to provide care, due to those providers who are uncomfortable with transgender people declining to take part. According to study leader Deirdre Shires of Michigan State University, "These barriers suggest that willingness is not necessarily equivalent to competence." Shires goes on to say that "it is important for medical education to address not only clinical knowledge but also personal biases and attitudes as well."

So, with more transgender adults and children coming out every day and the lack of training in medical educational institutions being slow to take up the mantle, what's a community to do?

TransFamily of NWPA and the Erie County Department of Health have been collaborating to deliver the first ever LGBTQ+ Provider Training Conference in Erie that will focus on not only understanding the specialized needs of Lesbian, Gay, Bisexual, Transgender, and Queer patients, but also on the cultural competency required to treat these patients with the dignity and respect that they deserve. The training will be delivered in cooperation with the Erie County Department of Health, TransFamily of NWPA, and University of Pittsburgh Medical Center (UPMC). The conference will take place on May 31, 2019 at the Ambassador Banquet and Conference Center at 7794 Peach St.

This conference will focus on level-setting the cultural awareness and competency required of medical and mental health providers and staff to provide quality, competent, respectful treatment of LGBTQ patients. Future trainings will focus on more specific treatments and protocols, such as hormone replacement therapy, OBGYN care, Pediatrics care, etc.

One of the most important ways that we can increase cultural awareness and reduce implicit bias on the part of providers is simply to share experiences. People who identify as transgender have amazing and sometimes heartbreaking experiences to share that highlight the need for competent services, and it is important for these providers to listen to these stories and learn from them.

So, what is it about being LGBTQ that requires some different approaches to care? Aside from the biological differences that providers might encounter, there are a lot of other questions that need to be asked and understood within the context of being a sexual or gender minority.

This conference is appropriate for anyone who has regular contact with LGBTQ patients seeking medical or mental health care, especially front-line staff, nurses, doctors, therapists, psychiatrists, blended case managers, etc. It is important to understand that medical and mental health are inextricably linked, with experiences, positive or negative, in one area affecting possible outcomes in the other. This is about the overall wellness of LGBTQ patients, and each is just as important as the other.

The LGBTQ+ Provider Training Conference takes place on May 31, 2019 at the Ambassador Conference Center in Erie, PA. Please contact Haylee Esposito at 814-877-5691 or by email at espositoh@upmc.edu with any questions. You can register for the conference at http://ccehs.upmc.com.

Caitlyn Strohmeyer, MSW, is a life-long Erie resident, a social worker, community advocate, and a transgender woman. Caitlyn is the founder and past president of TransFamily of NWPA, a grassroots organization that operates several support groups throughout Northwest Pennsylvania and advocates for the rights of all transgender people of the region. She currently works as a Crisis Clinician for Safe Harbor Behavioral Health of UPMC Hamot, remains involved with TransFamily of NWPA as Board Advisor, and sits on the Mayor's LGBTQ+ Advisory Council. She can be reached at caitlynxpress@gmail.com