How to weather our COVID-19 winter

by Liz Allen
View ProfileFacebookTwitterRSS Feed
January 13, 2021 at 10:30 AM 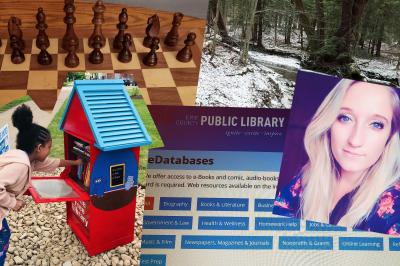 Tired of being tethered to Zoom? I am, too.

But thanks in part to suggestions from Zoom friends and other sources, I've cobbled together five ideas to help you beat the COVID winter blues.

On my Monday Zooms with friends from the Villa class of '69, we vent about Trumpian politics and help each other cope with the anger, fear, and frustration about our country's descent into chaos.

We also reminisce, including about the time when two enterprising classmates started a Villa chess club. I joined but was never a stellar player. Still, given the raves for the Netflix blockbuster The Queen's Gambit, I thought maybe I should try chess again, so I called Craig Schneider, 63, former Erie Chess Club president who now lives in Arizona with his wife, Diane, to get some encouragement.

Schneider's dad, the late George Schneider, taught him to play at age 10, and neighbor Jim Walczak, who became a well-known Erie lawyer, helped him hone his skills.

When he was young, Schneider played "postal chess" with competitors around the world. He'd make a move, mark it on a postcard, mail it, then wait for his opponent to respond. Now, chess has "really exploded" online, and playing Internet games has helped to create a sense of community during the pandemic. "You can talk to people from South Africa or Arab countries," he said, adding that he introduces himself by saying "Yes, I'm an American, and Trump is an idiot."

There are lots of takeaways from The Queen's Gambit, a seven-part mini-series, he said, but one is that the fictional main character, Beth Harmon (Anya Taylor-Joy), learns early on that she must be a good sport when she loses. "Don't keep dragging it on like he who cannot be named," Schneider jabbed.

To learn or to brush up on chess, Schneider recommends lichess.org, which offers free games and lessons. To learn more about the Erie chess scene, including an online tournament starting Jan. 24, check out the Erie Chess Club on Facebook, where you can read many interesting posts about the benefits of playing chess.

As Schneider described the intrinsic joy and the intellectual challenges of the game, he stressed that chess teaches strategic planning, individual decision-making, and adaptability — proficiencies we all need to master as we wait for life to return to normal.

Make Tracks to a Park

Solitary and socially-distanced walks were my salvation through spring, summer, and fall, and since I'm leery about going back to the gym, I asked Kristen Currier, environmental educator for the Erie County Conservation District, for some places to explore to keep fit in winter.

These parks are also good places to take dogs, but make sure they are managed with a leash or a remote collar.

Lake Erie Community Park "is going to be a little more work," she said, because unlike some of the other parks she recommends, it doesn't have paved trails. But if you like to hike or snowshoe, you will be rewarded with "phenomenal" views of Lake Erie over the bluffs.

Bull's Dam/Eaton Reservoir is accessible from Pennsylvania or New York State (sitting just west of the state line) and also provides "gorgeous" views, she said. The three-mile trail is not paved but it's great for a fat-tire bike ride.

One upside to exploring parks in the stillness of winter is that you can listen for the birds that are here year-round. "Now you can hear the chickadee or the cardinal or the blue jay," she said. "During the summer you can build on that repertoire of what you learned."

Look in the mud or snow and you might see the imprint of a muskrat or "tracks as light as a field mouse," she said. "You can even piece together an entire story," she said. Learn to distinguish the prints of cats, dogs, and coyotes. "Were they running? Were they walking?" she added. "I like to solve a mystery. What were they doing when they were out here?" She's even detected a wing print in the snow from a bird of prey.

Check out the Headwaters Park Facebook page for more ideas on park scavenger hunts and information about the GooseChase app, which Penn State Behrend is using for a lot of family-friendly activities. I also recommend erieconservation.com; before you know it, it will be spring and time for its annual seedling sale!

Of course, I don't always relish dealing with the outdoor elements. That's when I daydream about visiting Italy's Tuscany region in some future summer. After recently connecting with a distant cousin there, I fantasize about learning Italian before my fantasy trip. What better place to start that adventure than through the "Transparent Language" course, one of many digital services offered on the Erie County Library's website, erielibrary.org?

With the help of Sheryl Thomas, assistant library director, I found information that is both fun and functional by clicking on e-databases on the website's "services" tab.

On "AtoZ databases" under "Business & Finance," you can search for jobs, create mailing lists and do market research, among many other functions.

"Test prep" can get you ready for undergraduate and graduate school exams, for the military aptitude tests and the U.S. Citizenship test, to name a few.

Other tabs will take you to Consumer Reports magazine, where you can check out ratings and recommendations for a slew of products. Try "Cars & Engines" for schematics to repair automobiles and other motorized equipment, including snowblowers.

For some genealogy resources, you have to physically use the library, but Blasco and the branches are only offering curbside service right now. However, Thomas said that the Fold3 site, with military documents, photos, and personal stories dating back to the Revolutionary War, is available online. "History comes alive in someone's handwriting," she said. "It's beautiful."

If you are wondering what to tackle next after finishing a good book, go to the "Books & Authors" tab, which has a wealth of resources for "read-alike" books similar to those you've already enjoyed. This is also where you will find OverDrive, to download e-books and audiobooks, and hoopla, which offers books, music, movies, comics, TV shows, and other materials for download.

Erie's reputation for generosity remains intact, even during a pandemic. This was demonstrated during the 2020 Erie Gives Day, when $6,358,146 was raised for nonprofits. According to the Erie Community Foundation, that set a record for Erie Gives, which marked its 10-year anniversary.

Erie people also like to volunteer to help those in need, but that's been a little more difficult during COVID-19, according to Joelyn Bush, director of marketing and communications for United Way of Erie County. For example, even if you'd like to offer virtual help for United Way's Community Schools initiative, you need a TB test, which is not easy to get during the pandemic.

Nevertheless, there are usually anywhere between 300 and 400 active volunteer opportunities at United Way's GetConnectedErie.org resource. If you register, you can get alerts as volunteer openings arise. Bush also urged nonprofits to register on the site to let volunteers know about their needs. "We're only as good as the database," she said.

One practical way to help out now, especially if you are doing some housekeeping, is to help restock the Little Free Libraries scattered at various places in our community. Find a list of locations at unitedwayerie.org/little-free-libraries. When you add books to the libraries, you can also note if the library boxes, which are unique and creative, need repairs, Bush said.

If you are looking to donate clothing, you can also visit PA211NW.org or call 211. This is a helpline for those who need social services but "it works both ways," if you want to assist those in need.

And please remember those who are experiencing homelessness. The Erie United Methodist Alliance is looking for volunteers for overflow shelters through the Our Neighbors' Place program. "EUMA provides masks, face shields, gloves for all guests and volunteers and requires COVID-19 screening for all guests, staff, and volunteers," said Kurt Crays, EUMA executive director.

To learn more, visit EUMA-Erie.org and click on "Get Involved," then "Volunteer."

You might be fed up with politics, but the municipal primary looms on May 18, and if you want to make change at the local level, this is your chance.

"I think everyone should run for office. It makes for better government," said Lydia Laythe, 27, who won her race for Washington Township supervisor in November 2019. Two of the three board seats were open due to retirements.

Running for elected office was a new venture for Laythe, who served on Student Council at Mercyhurst Prep but in college, had "taken on a different role of speaking truth to power" as a student journalist.

To prepare, she took part in Emerge Pennsylvania, which trains Democratic Party women to run for office. Don't be scared off by tuition costs for candidate training programs, she said. Some provide scholarships or allow you to raise funds for the organization to help cover costs.

Outreach was a key part of her success. She attended community events, knocked on doors, and reached out to local businesses to find out about their needs. In-person grassroots efforts will be more daunting because of the pandemic, but Laythe advised potential candidates to think about the many ways to connect these days, including through social media and virtual events.

In addition, she said, don't be scared off by the process or the position. To prepare for her run, she met with the township supervisors to learn about their jobs. "Demystify the position," she said. "Talk to people who have done it before."

You don't have to have all the answers, either, but it's vital to listen to different perspectives and to understand that every elected official brings something to the table.

At its heart, "government is just taking care of the needs of the people," she said.

You can learn more about Laythe, who works for the U.S. Committee on Refugees and Immigrants, on the "Our Erie" podcast that she, Davona Pacley, and Marty Nwachukwu host.

The first day to circulate nominating petitions for the 2021 Municipal Primary is Feb. 16. To learn more about deadlines, financial forms, and other requirements to run, visit eriecountypa.gov; click on "departments," then "elections and voting."

Liz Allen strongly urges readers to support journalism, including the Erie Reader, during this winter when freedom of the press faces serious threats. You can reach her at lizallenerie@gmail.com