Opinion: This is Crazy

Though not unwarranted, everything feels surreal right now 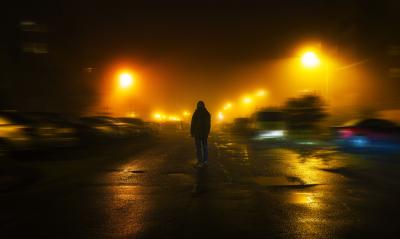 This all feels like it's still a dream, though not quite a nightmare just yet. It just feels like the opening act of your run-of-the-mill apocalypse movie. When we wake up tomorrow and almost every store is closed ... then what? Though I know I should quarantine myself like so many others are doing, I can't help but imagine what it would be like to walk down the middle of State Street like Rick Grimes on the first episode of The Walking Dead, or Tom Cruise as he runs through Times Square in the opening to Vanilla Sky.

Preventative measures are a good thing, but that definitely doesn't mean they're an easy thing.

I throw that word out too often that it's practically lost all meaning. Using that word is not meant to be a slight to those suffering from mental illness. I've tried to curb it, and hopefully will more.

I don't want to be an alarmist, but THIS IS CRAZY.

Maybe it's my pent-up denial coming out all at once. It's like feeling the wind on my face before a blindfold is taken off, only to realize that I'm falling from a plane. "What am I going to do?" I ask myself. "When am I going to land?"

We know what to do already. Wash your hands regularly, avoid touching your face, use hand sanitizer, and avoid large gatherings of people. That last one is what got us here, to begin with.

We're all going to land, but we need the parachute to open.

A lot of people are losing work. Not everyone can work from home. Many people have already lost their jobs because of this, and many more will. A lot of businesses will never recover from what's about to take place. Lives will be irrevocably altered thanks to a couple of weeks of silence.

Some people will be prepared. Those lucky enough to have a well-stocked pantry, and an even more well-stocked bank account will probably be fine. Some of us aren't as prepared and don't know exactly how we're going to get through this unscathed.

Whatever we can do to help each other, we need to do that. Those in power need to do their part and know that we're all in the same boat. Everything from landlords forgiving rent, to bosses granting extra paid vacation days, to the government stepping in to help subsidize lost wages should be considered.

We can brace each other's fall. Nowadays, "social distancing" doesn't mean a lack of human contact. We're going to communicate online and over the phone to brighten each other's days, to commiserate, and to just connect to one another. Some people thrive on this and it's going to be important on both ends. Others will be content keeping to themselves like they've always liked doing and will be a little more prepared than the rest of us, happy to get lost in things like video games, tv, and movies.

It's when the dust clears that this will finally stop being so crazy. That dust is going to be there for a while, and we might even need facemasks to ward it off. But that dust will settle.

We'll say to ourselves, "that was crazy." and maybe we'll smile thinking of that word "was."