by Charles Brown
View ProfileFacebookTwitterInstagramRSS Feed
March 2, 2022 at 11:15 AM 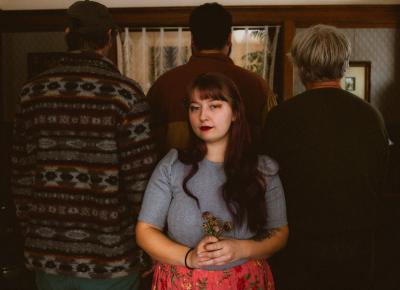 March 4 will be a precious day for indie-rock artist Optimistic Apocalypse. You might've heard her angelic sound over the years touching the hearts and souls of those who have witnessed her from stage to stage in the Erie area.

Beginning her songwriting at the age of eight and then playing music a few short years later, Optimistic Apocalypse (aka Mckenzie Sprague), has made a name for herself while remaining humble and dedicated to her passion. With a new album prepped for release titled Above The Land, people will get a chance to dive into her world on a deeper level for a glimpse inside the mind and heart of the young singer-songwriter.

The *Above The Land album release party will also serve as an art exhibition for Sprague's paintings, with the entire event being held at Erie's City Gallery.

"I've always had a vision to keep my art and music together," says the artist. "I get to express myself visually with art, whereas music is a deeper emotional outlet for me." And as an artist, Optimistic Apocalypse goes by the moniker "Vivid not Timid" to show an extension of herself. The young vocalist admits that her artwork is heavily inspired by her lyrics that use the imagery of flowers, water, and other motifs.

The inspirations behind Above The Land are even more thematic, which Sprague says are nature, life, death, her garden, and the raw emotions that she's endured throughout the last several years. Optimistic Apocalypse fittingly has a pleasant perspective on the world through it all and hopes that others will view our existence in the same light.

"I want people to leave my album release thinking about how lucky we are to live on such a beautiful planet," says the singer. "I hope it makes people realize how important coexisting with nature is."

As if her positive sound and vibrant watercolors aren't enough to appease your senses already, Sprague has put quite a lineup together leading to her performance, featuring Slim and Red, Brooke Surgener, and Tiny Paper Boats. Remarkably, at least one member from each band had a part in the making of Above The Land, from backup vocals and instrumentation to mastering.

She would also thank her partner and bass player Brent Knight who provided a feeling of comfort and "laid-backness" that helped her to record her sophomore project. With a four-year process making the album come together, using a mobile studio that allowed her to record anywhere, the indie-rock artist wanted to present her album in a special way that'll leave people in awe and – dare I say it – optimistic about the present time.

Leading up to the event, Optimistic has also started a fundraising campaign to create T-shirts for her fans through indiegogo that will be available the evening of her event. The merch area will have a design made by her that will coordinate with the theme of the exhibition and of course, her music.

March 4th will bring everything inside of Mckenzie's world together, a true reflection of how we all should see our Earth and existence regardless of any worldly perils that we are facing. Above The Land album release and art exhibit is determined to be a beacon of light that we all may have been looking for. – Charles Brown