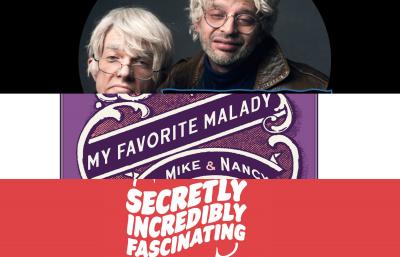 Your favorite Tony-award watchers and boisterous New Yorkers return from their comedy show Oh Hello, On Broadway to bring you Oh, Hello, the P'dcast.

George St. Geegland and Gil Faizon, the geriatric-gone-wild alter-egos of John Mulaney and Nick Kroll, run what seems to be a celebrity-driven charity drive without the audience knowing. With guests Pete Davidson, John Oliver, Lin-Manuel Miranda, and others, the podcast asks listeners to donate to Off Their Plate, a very real organization that provides meals to emergency health care workers during the pandemic.

The pair start with their pitch of deep-diving into the death of Princess Diana, carried on through the show they refer to as "Die-Town," a play on Brian Reed's "S-Town."

Running off-track, listeners get a glimpse into the moderately chaotic minds of St. Geegland and Faizon, who talk about their time in New York, from past lovers to the struggles of quarantine. The niche comedy brings irreverent humor to the forefront, examining pop-culture topics such as modern politics, musicals, Uber drivers, and the loss of diet root beer on draft. All in all, this podcast proves to be a much-needed and hilarious diversion from the stressful times of the pandemic and election cycle.
— Chloe Forbes

If you've ever wondered about the weird and wonderful world of the evolution of medicine, look no further than the Mütter Museum at The College of Physicians of Philadelphia. In a "cabinet museum" setting, their collection boasts items such as Einstein's brain, Dr. Joseph Hyrtl's human skull collection, and a specimen from John Wilkes Booth's vertebra. The morbidly curious will be intrigued by the Mütter Museum's new podcast, My Favorite Malady, hosted by self-identified "science goths" Mike VanHelder and Nancy Hill, members of the Mütter Museum's staff. Although still in its infancy (at the time of this writing, it just released its third episode), this podcast holds great promise, as there is no shortage of medical maladies and mysteries peppering modern history. With subjects in the first episodes ranging from Blackwater Fever to the No-Nose Clubs of 18th century London to Trench Mouth, from Puerperal Fever and Giant Hogweed Phototoxicity, My Favorite Malady has a lot to offer those curious about the mysteries of medical history. VanHelder and Hill (with the occasional guest) take this morbidly interesting history of mysterious illnesses and medical events and create wonderfully told tales that leave listeners eager for more.
— Ally Kutz

If you were a fan of The Cracked Podcast, put this in your feed immediately. Last year, Cracked was acquired by Literally Media. In June, they dismissed writer Alex Schmidt and with him, The Cracked Podcast, arguably the single most lovable offering the site ever produced. Beginning in 2013, it showcased little-known historical events, pop culture headcanon, and underreported news. They eventually adopted the repeated slogan "Why being alive is more interesting than people think it is." Alex Schmidt took over for the show's original host, Jack O'Brien, in 2017 … after the company was purchased by the E. W. Scripps Company. Secretly Incredibly Fascinating is, for all intents and purposes, the next evolution of The Cracked Podcast. Forgoing its precursor's penchant for the kinds of clickbaity titles that made the site such a commodity, SIF employs minimalist titling. Currently a dozen weeks in, Schmidt is joined by familiar voices, such as Jason Pargin, Soren Bowie, and Adam Todd Brown. Also, they use the same tagline, and another theme courtesy of The Budos Band. Also, also if you're looking for more of an apéritif from Schmidt, check out his surprisingly beautiful miniseries 1 Way To Make An Emoji.
— Nick Warren