"When all is said and socialized, it often shows up in something called a 'society column,'" writes Rebecca Styn. Officially introducing "Out and About with the In Crowd." 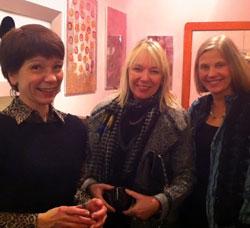 When all is said and socialized, it often shows up in something called a "society column." These columns used to be centered upon the lives and social gatherings of the rich and famous – but they have since come a long way. Today, they are also intended for the do-gooders, the ones that contribute to society, and the ones that make things happen.

And just to be upfront here, I've been known to open a paper or two in my day just to see if my name was listed amongst the committee members, or as an attendee to an event, just so I could stand on my little street corner soapbox of 'socialite' for one more week [I'm only semi-joking here].

So, because of my narcissism—and of course for my love of the do-gooders of society—I am going to start reporting on the great things going on and who's making them happen. If you have a great event coming up that you want to promote ahead of time tell me about it. If you think you just had the best event ever and the (Reader) world should know, umm, tell me about it. If you know someone that would never talk about the good they do out there, but think people should know who this person is, uh, yeah…tell me about. If you're trying to sell cookie dough for your kid's 5th grade class trip to the zoo, call the Reader's own Jay Stevens—I hear he likes to report on that stuff. In the interim, I will pick and choose these happenings/events/places to cover (unless the editors of this publication tell me otherwise) and report them back to you. All information will serve a greater purpose – to not only let you know what is going on in our great city – but who's integral in helping to make it a better place to live, work and play – whether they're helping to create or support it.

Father Christmas at the Schanz

There are three stages of a man's life: He believes in Santa Claus, he doesn't believe in Santa Claus, and he is Santa Claus. I don't know who said that (actually, nobody does – thanks a lot, 'anonymous') but for the past twenty years, local artist Fran Schanz has held the position of all three. Annually, he and his wife, Shirley, host what is called a "Santa Party." And it is literally that. An event where people can eat, drink, and be merry while checking out the (very) vast stockpile of Santa's the Schanz's have gathered over the years. The collection has been showcased on local television and beamed live around the world on Internet at the Erie Art Museum. It has also spent a winter in Old Main at Mercyhurst College. Last year, a close friend of Fran's, Theresa Gamble suggested it be installed at his 1502 State Street gallery, "the Schanz," and made a permanent installation. With that, (more than) a few friendly faces showed up last Friday to welcome this colossal collection of Kringles.

To those interested in checking this creative and monumental collection, the installation is open to the public and can be seen every Friday afternoon year round or anytime by request.

Do you have an event you want to promote or want covered? Email me at: rstyn@eriereader.com.