One night. Multiple events. Maybe you missed something, but Rebecca Styn didn?t, as she was Out and About with the In Crowd. 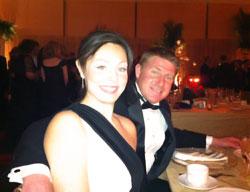 Although Erie offers an abundant of things to do any particular day or night, I find that time and time again when there is a major event (fundraiser, wedding, birthday, etc.) occurring in this great city, there is another major affair going on at the exact same time.

The good news is that we can pretty much get anywhere around here in less than 15 minutes. The bad news is that while possible, it's not probable that we will do just that.

So if you weren't able to make it to any of the great events listed below – never fail – this is what I'm here for….

The RCC's 25th anniversary was recently celebrated at the newly re-opened Stonehouse Inn & Spa. According to General Manager Michael Linehart, "We wanted to get involved with a charitable organization and tie it into our grand re-opening. Cancer affects everyone, and we are no different. There are survivors that are part of our team that have been affected by the disease, and ultimately we felt this would be a great event to work together on."

And it was. The reception drew well over 140 people and those in attendance enjoyed 15 different hors d'oeuvres prepared by Chef Marc Beraducci. Although the event was a little more "comfortably" packed, the tucked away, English-style country manor provided a perfect setting for the snowy night. A few of those in attendance included RCC's President, Geri Cicchetti, Art Martinucci, Jr. and his wife Deb; Russ and Susan Forquer, Laura and Jim Semple, Abigail Adams Greenway, Dan McHenry, Lynn and Dale McBrier and Pete and Patty Gool.

Aptly hosted by the Martin Luther King, Jr. Center, the MLK awards were recently held at the Ambassador Hotel. This event was created to honor those members of the Erie community who have put forth altruistic acts and consistent efforts to help those throughout the region. Those individuals honored this year, included: the Rev. Herlis Murphy, Dr. Anthony Snow, Steve Simmelkjaer, Charles Kennedy, Jr. (posthumously) and "white soul brother," James W. Martin (guest speaker John Hope Bryant, Chairman and CEO of Operation Hope opened his presentation with this introduction and nickname for Martin—if any of you know James W., you can decide if this is a fitting description or not).

The event kicked off with a pre-party in the Hemingway ballroom and some of the guests who came to support the honorees included: Mayor Joseph Sinnott, William Jeffress; Gannon University President Dr. Keith Taylor; Vanessa Herring of WICU, Jay and Ruth Alberstadt, Chuck Scalise; and Paul Lukach.

Oh, and unlike some festivities that happen in Erie, these guys know how to throw a party—the event lasted until 1 a.m.

The Hamot Health Foundation recently held its 2nd annual gala – an event that though originally intended as a one hit wonder, was so popular it was decided to make it an annual occurrence. And it's still all the rage.

This year, it drew well over 500 people to its apothecary gardens and vintage European setting. The design team, led by Heather McBrier of McBrier Events, included Melissa Poloskey of Allburn Florists, Dave Ashby, who helped create the video images projected throughout the ballroom, and Nick Hutchinson, who designed and built the bars.

The setting was one similar to what would be inside the Palace of Versailles. According to Heather, "I am not a fan of themes. I wanted to create something that everyone could take their own ideas away from. To me, it's like an art – I enjoy creating an atmosphere that is interpreted differently by everyone."

Which is a good thing because my warped mind interpreted the backdrop to be the grand ballroom in the Overlook Hotel in the Shining (p.s.: this is a compliment). The ballroom was covered in brilliant reds and golds and all the minute details were speckled with crystal and bathed in candlelight. The Heliotropes Katie Chriest greeted guests with her vocal stylings, belting tunes into a vintage microphone. Guests were donned in long gowns and tuxedoes. All that was missing was Lloyd the bartender. Though there were several others there that served up a fine cocktail – or three.

The best part though? Partial proceeds from the event will go toward supporting a new, school-based health center to be located at Wayne Elementary School. Other guests in attendance included: John and Gina Rullo, Laura and Mike Nelson; Emily Hutchinson (Nick's wife); Brian and Karen Migdal; Drew and Nicole Baldwin; Andrew and Amanda Lincoln; Scott Gezymalla and Samantha Lincoln; Bernadette and Matt Catrabone; and Jody and Tom Farrell.