Out with the Old and In with the New 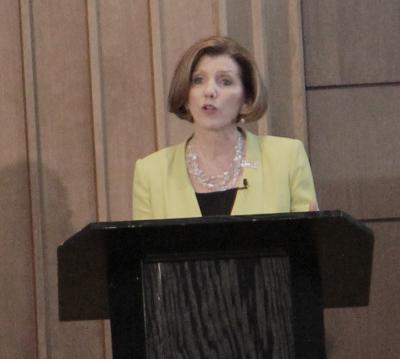 Erie voters cast their ballots and decided it was time for some fresh faces. Well, sort of.

Austin will face Republican challenger Ned Smith, who was unopposed in the primaries, in the General Elections Tuesday, Nov. 5. No Republican candidate ran for the 4nd District in the primary, almost guaranteeing Breneman will take the seat come fall.

But the biggest news of the night came when Erie waved bye-bye to Barry and said hello – well, welcome back – to Kathy.

The race between Democratic Incumbent Barry Grossman and former U.S. Congresswoman Kathy Dahlkemper had drawn the most attention in Erie's 2013 primary elections ever since Dahlkemper confirmed her bid Monday, Feb. 25 after rumors of planning a run at several other offices, ranging from Erie mayor to Pennsylvania governor.

In the email in which she confirmed her intentions, Dalhkamper wrote, "I have decided that serving the people of northwest Pennsylvania as county executive affords me the greatest opportunity to help advance the region I love so much."

The former congresswoman echoed those sentiments in a phone interview shortly after Grossman called her before 10 p.m. to concede the election.

"I'm doing this because I truly care about Erie," she said.

Dalhkemper focused her campaign on jobs – which she cited as her No. 1 issue, and credited her victory to her outreach throughout the community.

"We knocked on thousands and thousands of doors," she said.

Grossman, who could not be reached for comment Tuesday night, had campaigned on his accomplishments during his first term, citing a balanced budget three years running.

With the win, Dalhkemper will now face Republican challenger Don Tucci, who defeated Tom Loftus 40.11 percent to 35.81 percent for the GOP nod.

Councilman John Evans was the sole Republican on the ballot Tuesday, and will round out November's bill.

In the race for Judge of the Court of Common Pleas, Republican Bob Sambroak bested Jamie Mead, Bill Kelly, Jr., and Joe Walsh for the Republican bid. Sambroak, Erie County's First Assistant District Attorney, took the ticket with 32.81 percent of the vote to Mead's 23.46, Kelly's 22.56 and Walsh's 21.08.

But because all of the candidates cross-filed, Sambroak will square off with Kelly in the fall.

On the Democratic ballot, Kelly barely bested Walsh, earning 26.77 percent of the vote to Walsh's 26.61. Sambroak came in a close third with 24.73 percent and Mead closed out the race with 21.83.

But what does all of this add up to? It adds up to one out of every four registered voters deciding for the lot of us. While the turnout numbers weren't as low as they were in 1998 – Erie's lowest turnout at 13 percent – a dismal 26.35 percent made the effort to get to the polls Tuesday, a drastic decrease from 2012's primary turnout of 68.5 percent.

But that was a presidential primary. And names like Barack Obama and Mitt Romney were on the ballot.

So we'll start the battle cry now: Get informed, get opinioned, get chatty, and get out and vote. After all, you have over five months to prepare for Nov. 5 General Election.