The album may abandon many of the fantastical elements of past albums, eschewing sci-fi and adventurous themes for personal first-person takes, but the results are surely fantastic.

by Alex Bieler
View ProfileFacebookTwitterInstagramGoogle+RSS Feed
June 16, 2014 at 9:06 AM 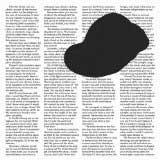 Owen Pallett's last album may have been released back in 2010, but the Canadian musician certainly hasn't been resting on his laurels. In the years since his concept album about a self-aware character in a made-up 14th century country, Pallett has kept busy arranging strings for Arcade Fire, contributing to the likes of The National and Taylor Swift, and earning an Oscar nomination for the soundtrack of Her. Fortunately, his return to his solo career results in the excellent In Conflict. The album may abandon many of the fantastical elements of past albums, eschewing sci-fi and adventurous themes for personal first-person takes, but the results are surely fantastic, from the pained cry of "I'll never have any children" on opener "I Am Not Afraid" to the final string plucks of "—-> (2)". It doesn't take long to get sucked in by the swells of strings and pulsing tones of In Conflict, and it continues to reward upon repeated listens. – Alex Bieler