PACA At the Forefront of Building the Arts Community

PACA's impact on the community continues to make an argument for the Creative Class. 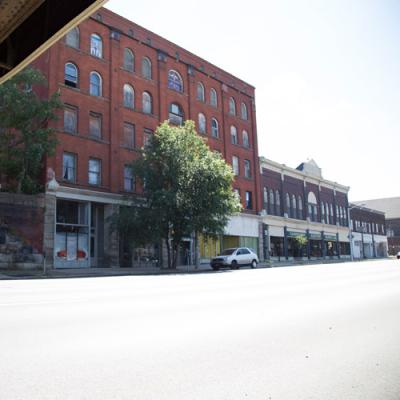 A lot of hard-working and dedicated people advocate for the arts in Erie every day: board members, patrons, volunteers, actors, politicians, gallery owners. Few of them speak as passionately or eloquently about how to revitalize Erie's art scene as Mark Tanenbaum.

Not only does he hold forth with bombast and fire, he's got great ideas that need to be heard. And it's not just noise. He backs up his plans with real action, putting all of his time and energy into making the City of Erie a better place by buttressing what he sees as the backbone of any city: those he calls "the Creative Class."

Tanenbaum's assertion is that the arts – as represented by music, theater, dance, painting, sculpting, or writing – are not just a way to make our city a fun and vibrant place to be. Rather, those endeavors actually have the power to save Erie, save our kids from violence, save our venerable architecture from demolition, save our economy from bankruptcy.

He cites Pittsburgh as an example.

"Everyone in Pittsburgh got on board: The banks, the industry, the government. They sank money into the arts – all the arts, big and small – the museums, the orchestras, right down to the tiny neighborhood theaters. Pretty soon," he says, "neighborhoods started to change."

Those industries that invested real, substantial capital started to see a return on their investment as those arts organizations grew. They took out loans. They bought and refurbished old buildings. They employed people. Maybe even more important, that vibrant art community got a broader community involved in the business of creating. More kids involved in theater or dance means fewer bored kids potentially causing trouble.

"The arts give kids something to do that is larger than themselves," explains Tanenbaum.

Get youth excited about the theater and pretty soon they start caring about their school or their church. And those kids become the next generation of creative minds that help drive the economy and keep the arts alive well into the future.

Instead of watching wave after wave of people leave the city, the strong creative spirit that Pittsburgh fostered attracted people to actually migrate to the region. In short, Pittsburgh is growing again, and the arts and investment in the arts play a big part.

Meanwhile, Erie continues to bleed population – and many of those leaving are our best and brightest. Tanenbaum contends that "if we allow our Creative Class to leave the city, it makes the situation here even worse. If they can't make a living, they can't stay here."

His solution is simple, logical, and proven: Our city needs to support organizations that build the community from its roots up. And that means with money. Instead of the Erie Playhouse, the Boys and Girls Club, and Little League Baseball all wondering if they will have enough money next year to continue the vital work they do, we need to actually fund them.

What is the radical realignment of thought that Tanenbaum proposes to our civic leaders? Instead of concentrating millions of dollars on building runways and hotels that do little in the long-term but continue to suck away taxpayer dollars, give that money to the underfunded organizations that are right now keeping Erie from falling down around us. It doesn't sound like a radical idea when he says it: "It's not rocket science. Just support the stuff that's already working!"

Despite the lack of funding from City, State, or County governments, the Erie arts community does have sources of support for places like the Performing Artists Collective Alliance (PACA). Erie Arts and Culture helps fund the important work of building our community from the inside. But restrictions in the geographic limits of their charter keep The Erie Downtown Partnership from throwing their resources behind PACA. EDP Executive Officer John Buchna states that the board of EDP is working on a master plan to help include such important Erie institutions as the Times News, V-Net, and Miller Brothers, as well as PACA, which all fall outside what is currently labeled "downtown," with current boundaries being drawn from Presque Isle to the 14th Street railway and between Sassafras to Holland streets running west to east. At 1505 State St., PACA sits just feet away from the southernboundary.

If you want to witness firsthand an arts organization that's working, go to what lies beyond that southern boundary. PACA is Tanenbaum's brainchild: a multi-dimensional space dedicated to all things artistic. Located in a classic Erie Industrial space on the ArtWorks building's second floor, it holds a theater, classrooms, an art gallery, and dance studio. Under PACA's occupancy, the space has rarely not been under constant remodeling and improvement. Currently, a new rubberized dance floor is being installed, acoustics are being improved in the music and theater classrooms, and the greenroom is getting huge mirrors hung for performers. 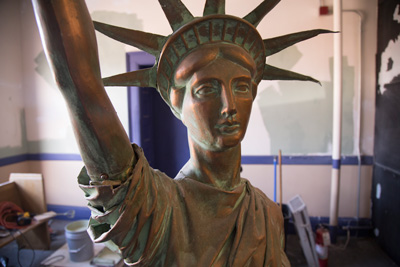 Over the past year alone, PACA has put on 150 performances. As an illustration of PACA's mission to promote all of the arts, you can find live music of all kinds there– jazz, folk, blues, roots, experimental and electronic, classical, and international music, as well as kids' programs, poetry, and spoken word. PACA prides itself on being a venue where up-and-coming local musicians can find a ready audience and get their foot in the door. But they're not shy about going after nationally and internationally touring acts, including three Grammy-winning jazz musicians who have graced the stage.

As the name implies, The Performing Artists Collective Alliance specializes in theater and performance art. Directed and performed by seasoned actors and directors on a small stage with a top-of-the-line sound and lighting system, the theater productions are intimate and singular. Of course, the theater company welcomes anyone who is willing to help out. People interested in the theater can try out for parts or work behind the scenes. They are always welcoming new performers into this distinguished group. Theater productions still to come this season include a collaboration with Erie Arts and Culture to produce Samuel Beckett's acclaimed End Game. And in October, it's Rocky Horror Picture Show Time! PACA is reviving this classic with a new cast and performances will run throughout the month, cumulating in their popular Halloween Bash.

Tanenbaum has made sure PACA's mission includes the visual arts. Last week, the walls were covered with ink-on-cardboard drawings by Mark Weber and Ken Paul Johnson's surreal oil paintings. The gallery space includes 180 running feet of blank walls where work from nearly every serious artist in Erie has hung. They have hung shows in conjunction with the Northwest Pennsylvania Artist Association and have been the location for several MFA Master's Thesis shows for Edinboro graduates. A show by a "top-secret" artist is promised for September's Gallery Night.

As if all this was not enough to keep Tanenbaum, his volunteers, his employees, and his board busy, there's more: Puppet theater, comedy performances, and classes all take place there. The dance company Triple Threat Studio will be using the space to give lessons in acting, ballet, and pretty much any performance-based activity a body can do.

Holding to PACA's mission of bringing all of the arts to every person they can, this studio is dedicated to providing a place where kids of all ages can be themselves, with the goal that they can learn and grow and go out and perform at all of our local theaters and schools and share their talents with the world. 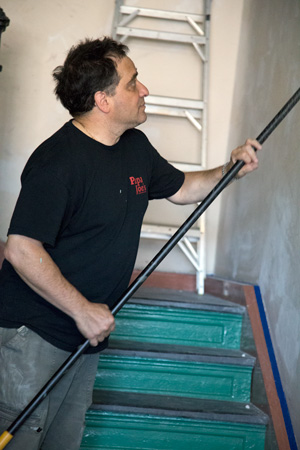 From Aug. 7 to 9, Attack of the PACA returned for its third installment. A truly distinctive – and truly PACA – event, Attack was a three-day festival that brought together all the arts under one roof, highlighting PACA's ongoing mission to support all areas of the arts. In the course of these three days, there was: Live theater featuring short one-act plays written by outstanding playwrights as well as locally-written skits; live music with local and national musicians; and specialty acts, some of whom demonstrated their craft at workshops. Surprising visual art filled the walls of the gallery. Boldly executed oils by Edinboro student, Ian Thiry and show coordinator Erica Whiting showcased new and upcoming talent alongside pen drawings and encaustics by veteran Robert Eustice.

So many activities went on that weekend that an outsider would think that chaos would reign; but watching the PACA staff switch sets on Saturday night after the Rocky Horror preview to make way for the National Marionette Theater's performance on Sunday morning was theater magic. As they worked, punk masters Teatime and prog-rockers Lower Eastside Connection kicked it out in the back. The staff and volunteers were all back again bright and early to get dozens of children and adults situated for a packed house to watch professional puppeteers perform Pinocchio.

Annually, Attack of the PACA is the way that Mark Tanenbaum and his team bring it all together to show off how all the arts in Erie work together.  This showcase of the diversity and talent of our "Creative Class" is ample evidence that Erie is vibrant and alive. Tanenbaum says of our community, "We are so savable."

Based on what's happening at PACA, that's a statement full of hope that we can all believe in.