PACA Not Horsing Around with Equus Run

Climb in the saddle and hold on for dear life; Equus at PACA is going full tilt. 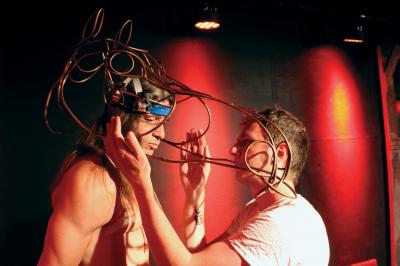 In 1971, playwright Sir Peter Shaffer was talking to a friend who had attended a dinner party, at which the topic of conversation included a disturbed young man who had used a spike to blind 26 horses. The friend relayed this gruesome anecdote, but failed to expound on the details. Shaffer wrote in 1973, "…it was enough to arouse in me an intense fascination."

Intense, indeed. From that encounter came Equus, Shaffer's fictional examination of Alan Strang, a 17-year-old boy with an almost religious obsession with horses, and his psychiatrist, the dissatisfied Dr. Martin Dysart. When the play opens, Strang — a disturbed but passionate youth whose combative, sullen exterior veils the darkness underneath — has blinded six horses and been brought in to Dysart for psychological treatment.

"Everyone has interior motivation for actions they conduct…everyone has an untold life. This play allows the audience to unravel that mystery as they see Alan unravel his," Mark Tanenbaum, co-director with Karen Schelinski, said. "The most important element is the storyline, which is rugged and true to life and allows the actors to sink deeply into their roles and characters. This play is a masterwork."

Audiences at the Performing Artists Collective Alliance (PACA) downtown can expect to be bolted to their seats by the emotional and psychological impact of Shaffer's fervent, terrifying script. "There are few plays written which have such a visceral effect on the audience," Tanenbaum continued. "Ask anyone who has seen any production of the show, they will all say that it is life-altering to sit in the theater and see the story unfold." — Cara Suppa

Equus contains adult situations and nudity and is intended only for mature audiences.