A film so tense it feels like a cinematic anxiety attack 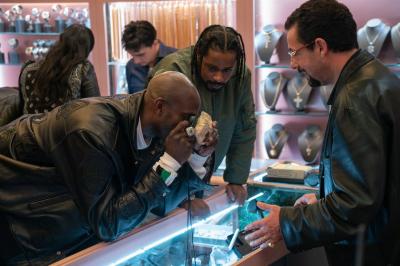 Uncut Gems, the new film by Josh and Benny Safdie (Heaven Knows What, Good Time) begins with an extreme close-up of a rare stone, briefly becomes psychedelic, and then morphs into footage of the main character's colonoscopy. It's the perfect metaphor for the film: we'll get uncomfortably close to the central character, but in doing so, maybe find something fascinating.

Adam Sandler is Howard Ratner, a New York City jeweler who's constantly on the move looking for a new big score. After a series of high-stakes bets, he finds himself $100,000 in debt, but he has a plan: trade his prized opal for Kevin Garnett's (playing himself) NBA ring, pawn that ring to make another high-stakes bet, use the winnings of that bet to pay his debts, and buy back the ring to trade back to Garnett for his opal before it goes to auction on Monday. Suffice to say, things get complicated.

The film is so tense it feels like a cinematic anxiety attack. Everything is shot in uncomfortably tight close-ups and the score (also reviewed this issue) is always just a little too overbearing. The result is the perfect recipe for tension. The Safdies hit big two years ago with Good Time (a film I was 100 percent wrong about), and this one continues their signature "New York paranoia" feel. In a way, they join the likes of Martin Scorsese and Abel Ferrara in showing the city's seedier parts in their own unique way. The film itself holds your attention thanks to the slick direction, perfect pacing, and the best performance of Sandler's career. Never before have I had this much fun being uncomfortable. — Forest Taylor