Head to Basement Transmissions Tuesday, May 21 to catch this D.C. indie band on the rise.

by Matt Flowers
View ProfileFacebookTwitterGoogle+RSS Feed
May 20, 2013 at 12:34 PM 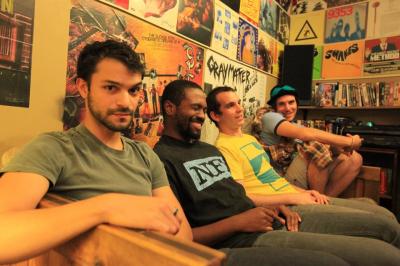 Basement Transmissions is going to be sending out some serious sound waves Tuesday, May 21 as Paperhaus will be taking the stage. These D.C. natives are on the second half of their two-month long U.S. tour, promoting their new Sophomore EP, "Lo Hi Lo."

Helicopters, Paperhaus' velvety-smooth single is catchy and cool, something I can image will be picked up for an indie film sound track sooner than later.

Although the song's lyrics reflect on a blossoming relationship at the end of the world, I feel like I'm stepping back in time. Their sound is reminiscent of '60s and '70s New York City Punk Rock; the calming factor of the Velvet Underground with enough kick to hear some Television too.

It's also good to see a new band paint a musical canvas without the safety-net-beige of contemporary "folk" rhythms. This isn't to say they don't have a little folk in them or folk isn't cool – they have passionate lyrics and a strong storytelling voice – but it's riding in the back seat while an older indie-sound takes the wheel.

Beyond the driving sound of Paperhaus, their video for "Helicopter" is everything you could ask from an up-and-coming band. It's innovative and passionate, while wrapped in a warm sense of humor. I'd highly recommend checking out video if only to see frontman Alex Tebeleff throw a cardboard grenade at a group of hipster prison guards.

But I think the most interesting part of Paperhaus is the member's "belief in the spiritually transformative power of music." This simple belief inspired "The Paperhaus," the band's DIY concert space for house shows. Over 100 bands have played the stage/living room floor, and I'm sure once their tour is over it'll continue hosting house shows.

As for now, they'll be coming to Erie's Basement Transmissions Tuesday, May 21, to show you what a rich sound a humble little row house in Petworth, Washington, D.C. can breed.