An album that finds the Brooklyn band more focused than before, but without sacrificing the ramshackle feel that drew in listeners from before.

by Alex Bieler
View ProfileFacebookTwitterInstagramGoogle+RSS Feed
June 16, 2014 at 9:04 AM 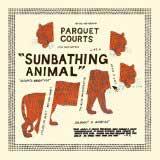 Just a year ago, Andrew Savage and his Parquet Courts cohorts found their way to the top of the slack-rock world with the fast-paced Light Up Gold, 15 songs that lasted a punchy, and extremely enjoyable, 33 minutes. Appropriately, the band didn't wait very long to start working on their follow up effort, resulting in Sunbathing Animal, an album that finds the Brooklyn band more focused than before, but without sacrificing the ramshackle feel that drew in listeners from before. "Bodies Made Of" and "Black and White" start the album off with a bang, each song containing enough ferocity to keep the songs from unraveling, a musical roller coaster ride where you don't quite know where Sunbathing Animal will turn next. Sometimes those swerves end up in some less pleasant sonic territory, like the last half of "She's Rolling," but the adventure is a fun enough ride to make up for the bumps in the road. – Alex Bieler