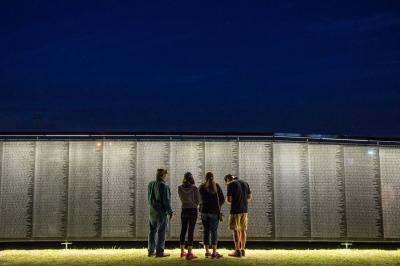 Dragging out for nearly 20 years, the Vietnam War (1955-1975) gouged deep scars in the American psyche. Widely misunderstood and hugely unpopular, the conflict pitting the pro-communist forces of the north against the pro-democratic forces of the south came at an immense cost — 58,220 U.S. service members were killed, 1,626 went missing in action, and more than 150,000 were wounded (with more than 21,000 of those injuries leading to permanent disability).

Perhaps even more incalculable than the loss suffered abroad was the sense of loss veterans felt after they returned home — stemming both from the traumas they sustained overseas and a tragic lack of support on domestic soil. The catastrophic failure of the Vietnam War as an ideological crusade and as a military operation had significantly eroded the public goodwill, with many opposers unable or unwilling to separate the atrocities of the war from the humanity of the men who were conscripted to fight in it. Some were greeted with derision or hostility; many more were greeted with circumspection or indifference.

For 50 years, Vietnam vets have been striving to attain the same dignity, respect, and appreciation afforded to veterans of other conflicts. And for most of that period, the Vietnam Veterans Memorial Fund (VVMF) has been the nonprofit organization driving that effort. Formed in 1979, the VVMF was authorized by the U.S. Congress in 1980 to build the Vietnam Veterans Memorial (aka "The Wall") in Washington, D.C., which was dedicated in 1982. Engraved in the black granite of the chevron-shaped structure are the names of every U.S. service member who lost his or her life in the war — a staggering 58,000-plus individuals listed by day of casualty.

It's no doubt an affecting experience, and thanks to The Wall That Heals traveling exhibit, one not limited to the District of Columbia — in fact, this Memorial Day Weekend, you can experience it right here in Erie on the grounds of the Zem Zem Shrine Club. The Wall That Heals consists of two major components — a ¾ scale replica of The Wall spanning 375 feet long and 7.5 feet high (at the apex) and a mobile education center featuring photos, artifacts, and Vietnam War timelines and background information. Since its debut on Veterans' Day 1996, the exhibit has been hosted in nearly 700 communities — it comes to Erie courtesy of sponsors Erie News Now and Lilley Broadcasting.

Visitors will be able to stop by at any hour during the exhibit's three-day stay, from Friday at 2 p.m. to Monday at 2 p.m. The 140 aluminum frame-mounted, Avonite synthetic granite panels will be fully illuminated all throughout the night, with paper and charcoal available for name rubbings. Those casualties and deceased returning veterans who listed their home of record in the Erie area will be commemorated in the "Hometown Heroes" and "In Memory Honor Roll" displays of the mobile education center, respectively.

If you know or know of anyone who participated in this controversial conflict — or were a participant yourself (thank you for your service) — The Wall That Heals invites anyone to pause and reflect, and stands as a strong salute to America's most often unheralded veterans. — Matt Swanseger