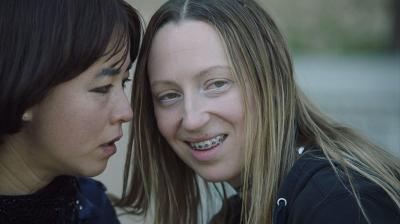 If you don't know about PEN15, get ready to join the club. The series stars Maya Erskine and Anna Konkle playing middle school versions of themselves. The gimmick: Everyone else plays their actual age. Acting alongside actors and actresses that are just barely teenagers, Erskine and Konkle are Maya Ishii-Peters and Anna Kone. The two are best friends in the most glorious way, two people being themselves and basking in all the weirdness they can muster.

Season Two, though ultimately less cartoonish than the first, barely skips a beat, taking place immediately after the events of Season One. Still in seventh grade, Maya and Anna deal with gossip from their classmates and navigate through the waters of middle school relationships. There's a school play, a new friend, sleepovers, and more, while the relatively mundane events of this era of one's life are made monumental. It's the balancing act that Erskine and Konkle do of being truthful and believable 13-year-olds with the scene-breaking insanity that the premise thrives on. It's sincerity and satire simultaneously. The viewer is both aware of the stretches being made, but able to buy into it for the amazing payoff. It's a hilarious show, with an attention to detail that will have anyone who grew up in the early 2000s both shocked and delighted at what's being repurposed for schtick. What viewers have now is purportedly the first half of Season Two. With filming cut short due to the COVID-19 pandemic, the latter half of this season will likely come in 2021. — Nick Warren