Pennsylvania to Impose Sanctions Against the Poor

Why Pennsylvania's "asset test" of food stamp recipients is a bad idea. 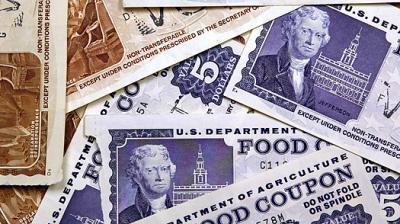 Any of y'all see this in the news?

Pennsylvania plans to make the amount of food stamps that people receive contingent on the assets they possess - an unexpected move that bucks national trends and places the commonwealth among a minority of states.

Specifically, the Department of Public Welfare said that as of May 1, people under 60 with more than $2,000 in savings and other assets would no longer be eligible for food stamps. For people over 60, the limit would be $3,250.

Is it me, or does this seem like a terrible idea?

The DPW plan caught many by surprise, but has been widely condemned by Philadelphia city officials, business leaders statewide, and advocates for the poor.

They point to federal statistics showing that Pennsylvania has one of the lowest food-stamp fraud rates in the nation: one-tenth of 1 percent.

Moreover, about 30 percent of people who are eligible for food stamps in Pennsylvania and throughout the nation don't access them, making the entitlement program under-subscribed.

Critics of the DPW plan say it would particularly punish elderly people saving for their burials, poor people trying to save enough money to get out of poverty, and working- and middle-class people who lost their jobs in the recession and may now have to liquidate assets to feed their families.

I can't wrap my head around this. Wouldn't performing an audit of everyone who receives food stamps be, you know, expensive? Wouldn't punishing people in poverty who are accumulating savings and assets be, you, know discouraging them from improving their condition? Wouldn't this program actually give welfare recipients a financial incentive to remain poor?

Which reminds me of a conversation I had with a student in a writing class. The student was writing a research paper arguing against abstinence-only sex education in schools. His problem was that he was entirely dismissive of those who held abstinence-only views. I explained to him that he needed to argue against the opposing viewpoint rationally, and to do so he needed to consider their viewpoint seriously, and with empathy.

That's the case with a lot of conservative stances. Torture? Doesn't work. Worse, it's counter-effective, producing unreliable, unactionable intelligence. (But those bastards deserve it!) Outlawing abortion? Doesn't reduce abortions. Worse, it demands government intrusion into our personal lives on a scale we can only begin to imagine. (But abortion is murder!) These are punitive only, and completely uneffective for solving real problems.

It's no way to run a government.