Persinger, Schember Look to Guide a City at a Crossroads

Erie decides which direction to turn on Nov. 7 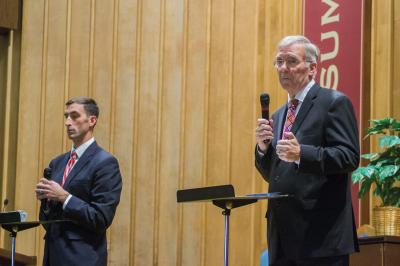 For the first time in 12 years, regardless of which political party assumes controls of the executive branch of city government, Erie will have a new leader. Completing the final year of his final term, Erie Mayor Joe Sinnott will leave the fifth floor of City Hall not by ballot but by the term limits (three four-year terms) imposed after Lou Tullio's two-decade-plus reign as mayor.

This is the chief difference between Erie's mayoral race and its county executive race: The presence of an incumbent with a record to judge.

A certain excitement exists in the unknown – especially after Sinnott won both his second and third terms uncontested. This either might serve as Erie's affirmation of the Sinnott administration or a signal that it's easier to run in an open field than challenge an incumbent. There were nine. And there were many more names rumored.

In the County Executive race, Democratic incumbent Kathy Dahlkemper, vying to keep her seat, is running on a proven record. Voters can keep course or opt for a change, but either way, they have something against which to judge one of the county executive candidates: A political record in that office.

Although Democrat Joe Schember has served on Erie City Council, neither he nor Republican John Persinger has held elected office in an executive capacity. And each is promoting their seemingly clean slates through their platforms.

There is another way the mayoral race is unlike the county executive race. Voter registration in the city favors democrats 3-to-1, making the path to victory for any Republican immediately more challenging by numbers alone. Whereas a Republican county executive candidate can appeal to both parties but still feel comfortably wrapped in a warm-enough GOP blanket, a Republican mayoral candidate must, without exception, convert thousands of Ds to Rs on the path to victory.

But at this point, what else can be said about Erie's mayoral race? After all, there's been a lot of talk, there continues to be a lot of talk, and here will be more talk after Nov. 7, no doubt.

Ask virtually anyone concerned with the fate and direction of Erie and they'll tell you that this is one of – if not the – most important election in Erie's history. Erie is at a crossroads. It's at a turning point. It must take action through leadership.

But that was said before May's primary election outcome, too. And then, less than one-third of registered voters made it to the polls to participate in democracy.

Spend more than five minutes with either Persinger and Schember and you'll know that both are well-intentioned and want a bright future for Erie, which undoubtedly appeals to voters given the vitriol spewed at the national level. And both are nice guys – they've pledged to keep their campaigns civil, and so far, they have.

Both see Erie Refocused, the city's comprehensive plan, as a pathway to a better Erie. However, they differ in their approaches.

Persinger's plan is more ambitious: Remove 1,000 blighted homes in 1,000 days. It's bold, for sure, and is gaining its due attention. Yet where the funds will come from specifically – an estimated $10 million – and where the people who live in the regions he plans to target will go remains unclear.

Both are big on education. Schember's plan is to work with the superintendent and Erie School Board to obtain fair funding from the state, saying on his website, "We need to join together on common issues like property taxes to expand the tax base and reduce the burden on city residents."

Of Persinger's three-point platform, education is first. "We must invest in education," Persinger says on his website. "If we don't' have a good, quality, public school system in Erie, then it is game over." As mayor, he says he, too, would work with the superintendent and School Board.

But the school system is a different taxing body. What does investment look like? How much control can either expect to have?

Like plans to address blight, details and specifics are light. Nevertheless, a call for better schools, improved education, and more funding sound great to voters. What the follow-through looks like in a year or four (or twelve), however, is more critical.

I wrote the following for a piece I drafted on the Erie County Executive race. Although the races are different, I believe it's worth considering here, too, in the days leading up to election:

What will be of further interest is what will happen between now and Tuesday, Nov. 7. Additional debates and forums will be held. Ads will saturate the airwaves. And citizens will get their first look at campaign finance reports.

In regards to the latter, out-of-county money was injected into local elections in 2016. Whether it's present again – how much and where from – remains to be seen but will be telling as to whether Erieites are the only ones who care about the outcome of this election.