I?m not just lurking aimlessly through cemeteries; I have a guide. It?s the Let?s Move Outside Erie County Recreational Passport, and I?m currently making my way along the Fort LeBoeuf Trail. LeBoeuf is one of 10 trails, and my mission is to complete all of them by October 20. If I do, I?ll get a prize for enjoying the outdoors, getting my heart rate up (climbing on covered bridges optional) and learning the stories behind local landmarks, such as Hare?s resting place. Pretty sweet deal, right? 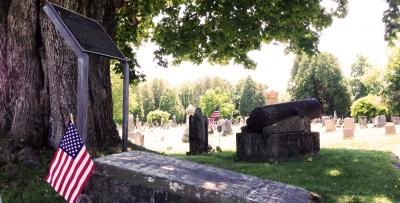 It's a hot and humid Saturday afternoon. Flies buzz above me in the big oak tree as I stare down at the grave. My fresh scrapes still sting from climbing around on that covered bridge, but I'm satisfied with finding what I'm now standing over. The grave belongs to Michael Hare.

Hare emigrated from Ireland, fought in the French and Indian War under George Washington, was scalped by the Indians during St. Claire's Expedition, survived and settled in Erie County, fathered 13 children, rallied for the Revolutionary War even though he was well into his 80s, and was finally laid to rest at 115 years of age.
A breeze picks up and my eyes shift to follow the direction of the cannon that sits next to Hare's headstone. I start walking in the same direction – on the road leading out of the Waterford Cemetery, directly down East Second Street.

I'm not just lurking aimlessly through cemeteries; I have a guide. It's the Let's Move Outside Erie County Recreational Passport, and I'm currently making my way along the Fort LeBoeuf Trail. LeBoeuf is one of 10 trails, and my mission is to complete all of them by October 20. If I do, I'll get a prize for enjoying the outdoors, getting my heart rate up (climbing on covered bridges optional) and learning the stories behind local landmarks, such as Hare's resting place. Pretty sweet deal, right?

When I make it to the Judson House, a couple is standing in front of the trail marker, he with his iPhone out. It's for the QR code that's on each marker, linking to a YouTube video that demonstrates gentle yoga poses. I chat with the couple about our being from the area and still learning fun facts about our community.

This is what can happen when people put their heads together. Let's Move Outside was a collaborative effort between many players in the Erie community – Erie Together, Visit Erie, the Erie County Health Department, Highmark, local artists, and many school districts and municipalities.

"The short version is that both Erie Yesterday and the Erie County Health Department had a passport program," explains Melinda Myer, president of Erie Yesterday. The purpose of a passport program is to guide people to explore different elements that exist in their own communities. "The common thread was Highmark, who sponsored both programs. Jim Martin suggested the collaboration, so we started a list of parks we wanted to use five years ago."

The idea blossomed. Local art, history, health, and culture helped to grow what is now Let's Move Outside. It embraces what Erie has become and where Erieites will tread for years to come.

After leaving Waterford, I head west to the Veteran's Memorial Park/Wainer Park Trail in Edinboro. The sun is still beating down as I mosey up the dirt road to the grassy knolls at the top. Colors are always amplified when you look at the jagged line that separates the textured green of trees and the clear blue openness of sky. I run around for a bit in the open field, then jog back to the trail marker for my yoga cool-down.

Each trail marker is unique to that community. Artist Tom Ferraro reached out to students of each school district to customize the markers.

"It was a great experience because I got to work with students who were seniors in high school all the way to fifth grade – nice group of kids," says Ferraro. "I went in and brought them something that was very open-ended. I gave them the history of trail markers and some visual imagery and history of art as it related to this project. They ended up designing the basic structure and provided the visual for what they saw their community to be. In the end, we really got a great flavor for each one."
Materials for the trail markers were chosen based on durability. The steel beams that keep them in place aren't treated, and the paint will fade after they take on the elements, taking on the natural and even rustic elements in which they are placed.

So who are these trails for?

Everyone. Walking groups with the YMCA hike the trails. Families spend an afternoon stretching their legs and learning something new. Then there are the sweaty weirdos like me, straying from the trail and just running around in the nearest field, making mental notes to Google Michael Hare when I get home.

"It allows you to get the history of the community and the trail, then you can tie them together," says Jim Martin, former director of strategic initiatives and community affairs at Highmark, who is credited for bringing the Let's Move Outside campaign to fruition. "It encourages you to be in another part of the county, and go into those local stores. It's bringing people together."

Martin isn't just talking about the strangers I befriended back at the Judson House; he means all the players it took to get this program off the ground. The Let's Move Outside Erie County Recreational Passport is technically in its pilot stage, which means its success and likelihood of adding more trails in the future relies on how many people turn up and log their progress on the website, letsmoveoutside.org.

I already have two down, and man, did I have fun exploring both of them – letting both my limbs and eyes stretch in the openness of nature, earning those scrapes by just enjoying what was in front of me, and seeing others along the way enjoying themselves as much as I did. So check out the website to start your own a healthy jaunt around the county, admire local art, or learn about the plethora of history this county is steeping in. Everything is right about Let's Move Outside.

Julia Nene can be contacted at jnene@eriereader.com