Pick of the Week: The Clarks Play P.I. Downs & Casino 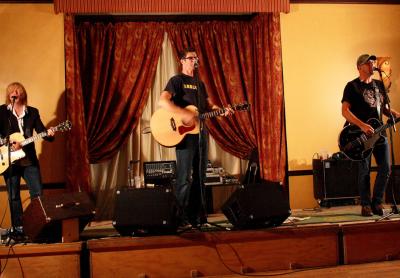 With more CDs than can be counted on fingers, The Clarks have been together for over 20 years. Throughout that 20 years, the Pittsburgh-based band has made countless trips north to Erie, successfully building a legion of loyal fans and followers here. At the end of the month—March 30 and 31—The Clarks will take the stage at the Presque Isle Downs and Casino for the first time. To get ready for the show, I had the pleasure of talking to bassist Greg Joseph on the phone.

Ben Speggen: You said you're writing right now. Are you working on new material?

Greg Joseph: Yeah—we're in the process evaluating what we want to do in the next year or two with the band, and writing new songs and getting new songs into the set are a priority at this point.

BS: How do you feel about returning to Erie?

GJ: We're excited. This will be nice to try out a new venue. It ought to be a lot of fun.

BS: With two nights of back-to-back shows, how will the shows be different or similar?

GJ: We've learned that you can't throw out certain songs without complete mutiny of the crowd, so there will be a few crossovers songs from one night to the next, but we always make sure that if we do two nights at any place, that we try to change up the songs, change up how we approach the set, so that people who are coming both nights get quite a bit of variety between the two.

BS: The last time I saw you, you were at Sherlock's; Scott called Erie the band's second home. What about Erie makes it feel like home to you?

GJ: One of our guys—he's not with us now, but he was with us the last time we were there—he was born and raised in Erie, so there was a family connection with one of the crew guys. And we've just gone up there for so many years. We stayed at the Thunderbird, so that's where we draw our history, our laughs, our post-show goofing around. We've done shows up there from Presque Isle to King's Rook to Docksider. We've played up and down there. Our history runs really long and deep with Erie, Pa.

BS: What do you like best about playing here, or Erie in general?

GJ: The Erie crowd's real similar to the Pittsburgh crowds and the Cleveland crowds—really enthusiastic. People know the words; they're familiar with the band. It's always a great crowd, always vibrant when we play up there.

GJ: I would imagine that as a collective group, Tom Petty would really be at the top of the list.

BS: You've had 20-plus years together. What do you want to do to say your career's complete, you've done everything that you want to do?

GJ: I don't think we'll know. Unless someone's physically unable to play, I don't think we call it quits because there are enough requests out there—clubs and county fairs looking to book the band. We're not interested in stopping that—not anytime soon.

BS: The Clarks are as Pittsburgh as Heinz Ketchup, The Steelers, and Premanti Bros. How do you feel about that?

GJ: I think it's a real honor in that Pittsburgh, I believe—and we've been all over the country—there is no city that is more loyal to its native sons and its historic figures, whether it be the Steelers, the Penguins, Primantis, Donny Iris. We're fortunate to grow up in this place and be part of the fabric of the institution of Pittsburgh.

BS: The band added Gary W. Jacob on steel guitar and Skip Sanders on keys and that seemed to add depth to the older cuts and allow room for exploration in the newer songs. But it also seemed to take the band in a country direction. Is this the way of the future for The Clarks?

GJ: What we decided—a little backstory to that—we looked at each other a few years ago, just before the 'Restless Days' project, and said, 'we've done what we can with the four of us, and it's starting to get stale. What can we do to infuse some new life?' It adds character to the old stuff, it brings new stuff from a different direction. The 'old country' thing has always been part of the main ingredient that we put into The Clarks. I don't know that we get away from that, but it's always there in a small piece at least.

BS: Twenty years is a long time to be married to the same band. Any solo projects for any of you guys in the works?

GJ: No. We've done a number of solo projects over the years—Scott [Blasey] and I have put out solo projects, Rob [James] has worked with a few other bands doing tracks on their records. [The Clarks] haven't had a project out in three years; we need to stay relevant, we need to put out new material, so that's the new carrot we're dangling in front of us for the next couple of years.

BS: I posted on Facebook and Twitter that I'd be interviewing you; one friend of mine responded that I had to ask you about John Knoll—he said he got him into all kinds of crazy situations back in the day.

GJ: [Laughs] Yeah, he must be a local Erie guy. [John's] a good guy. He just quit working with us about a month ago; he's moved on to a different job.

BS: Another friend of mine told me I had to get you to admit that the whole band is Clark Griswold enthusiasts. Come on, it's true, right?

BS: Thank you for your time, Greg. We're looking forward to the shows.

For an extended Q&A and further details on the upcoming shows, visit ErieReader.com.