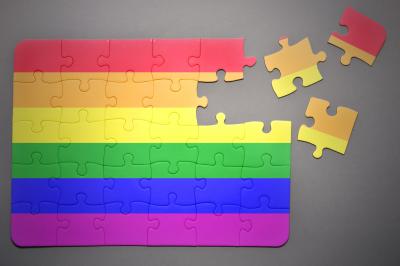 luzitanija
Learning the history of anything is like putting together a 1,000-piece puzzle, some say. But when it's the history of a marginalized group such as LGBTQIA+, those pieces are even more scattered.

At the end of last school year, a photograph shared on Facebook went locally viral. The poster was unhappy about a library display that included seven books with LGBTQIA+ themes at Maplewood High School in the Penncrest School District.

While the post might have vanished into the void after a few shares and mad-face emojis, it instead erupted on social media (and at school board meetings) when Penncrest school board member David Valesky shared the photograph of the display on his Facebook account, adding the following commentary: "Besides the point of being totally evil, this is not what we need to be teaching kids. They aren't at school to be brainwashed into thinking homosexuality is okay. Its [sic] actually being promoted to the point where it's even 'cool.'"

Many defended the school library as well as students within the district who were targets of the school board member's words. Still, numerous defenders of Valesky's unambiguously bigoted comments argued that having books with LGBTQIA+ themes available in the library was "indoctrination" of children — despite the fact that books in a library are voluntarily checked out. The books on display included a history of Nazi persecution of gay men, a history of the Stonewall riots that helped spur the Gay Rights Movement, a book highlighting LGBTQIA+ athletes, and a collection of interviews with six transgender young adults.

Such complaints and allegations aren't unique to the Penncrest School District, not even in our area. Providing access to a diverse selection of books in a high school library, which is the purpose of a library, is not brainwashing young people. The reality is that most teenagers graduate high school in the United States having learned very little about LGBTQIA+ related topics at all. According to the Gay, Lesbian & Straight Education Network's 2019 National School Climate Survey, less than 20 percent of LGBTQIA+ identifying students were exposed to any positive representations of LGBTQIA+ people, history, or events in school.

In most high school history classrooms, topics such as the Gay Rights Movement are skimmed over quickly or not even addressed. In one widely-used modern high school U.S. History textbook that is just shy of 1,000 pages, there are four paragraphs (or roughly half a page) dedicated to "LGBT Rights." It briefly mentions the Stonewall riots, the implementation and repeal of "Don't Ask, Don't Tell," and the 2015 Supreme Court ruling legalizing same-sex marriage.

Learning the history of anything is like collecting scattered segments of a 1,000-piece puzzle. For most people, even those who study history, these puzzles are vastly incomplete — but the more perspectives read, the more interpretations studied, and the more sources that information is pulled from and analyzed, the more complete one's puzzles become. The picture becomes clearer.

The LGBTQIA+ community is one of those historically marginalized groups. For all of the alleged indoctrination, relatively few Americans know even the basic historic details of these communities. For example, going back to the founding of the United States, persecution was the law of the land. There were states such as Virginia which had carried over colonial-era laws making sodomy punishable by death. Thomas Jefferson thought that capital punishment was a bit extreme, so he instead proposed an amendment to Virginia law. Instead of death, the penalty could be castration for a man or "by cutting thro' the cartilage of her nose a hole of one half inch diameter" for a woman. Virginia rejected his proposal and kept death as the punishment.

To identify as LGBTQIA+ for the vast majority of the history of the United States for many has been a life of living in the closet or being forced into the shadows. The first official gay rights group in the United States was only established less than a century ago as the Society for Human Rights. It was founded in Chicago in 1924 by a World War I veteran named Henry Gerber who had once been forced into a mental institution due to his sexuality. Following the creation of his organization, he would be constantly hounded by police and faced with newspaper headlines referring to his group as a "strange sex cult."

Progress was slow over the next three decades. Persecution and alienation were the rule, not the exception. The so-called "lavender scare" targeted gay and lesbian federal employees (spearheaded by Joseph McCarthy, who had associated them with communism during a speech), eventually culminating in President Dwight D. Eisenhower signing Executive Order 10450 in 1953, banning those identified as gay or lesbian for serving in federal jobs or contracted positions. Erie newspapers printed reports on these events, quoting McCarthy calling gay men "perverts" and, in another, publishing a nationally-syndicated column where the author stated: "There is no humor in homosexuality, as there is no humor in cancer, blindness, insanity or the state department."

Occasionally, the Erie papers would report on gay men being arrested for "moral offenses," for which they were often denied bail. Local homicides were sometimes sensationalized with a "homosexual angle" revealed by a confession during police interrogation. In more than one op-ed, homosexuality was referred to as a "disease." This was the same decade in which neurologist Walter Freeman was attempting to "cure" homosexuality with his "ice pick" lobotomies: a practice of damaging the prefrontal lobes of the brain by driving a pick through a person's eye socket bone. This was done using only a local anesthetic, meaning that they were awake and aware. He performed thousands of these, despite having no certified surgical training.

In 1958, there was a positive development. The Supreme Court case of One, Inc. v. Olesen overturned a lower court's ruling that a magazine written for a gay audience violated obscenity laws (this was after the Los Angeles Postmaster refused to deliver it through the United States Postal Service). This is considered a landmark First Amendment case.

Even if modern history textbooks do mention the Stonewall riots of 1969, also sometimes referred to as the Stonewall Uprising, there were many prior events that made its trajectory into a mass movement possible, such as José Sarria becoming the first openly gay candidate in the U.S. ever in 1961, the Mattachine Society's "sip-ins" of 1966, the activism of Drew Shafter in Kansas City, and the thousands of demonstrators who picketed and protested unfair treatment throughout the decade.

The first Pride march took place on June 28, 1970, the one-year anniversary of Stonewall. Three years later, the American Psychiatric Association removed homosexuality from its list of "psychiatric disorders," although The New York Times ran an interview with psychiatrists which made it clear that there was no consensus, with one stating that a male became gay during development in a similar fashion to a polio victim losing their ability to walk.

In 1977, reporter Debbie Wallace wrote a five-part series for the Erie Daily Times titled "Gay Life in Erie." In Erie during this time, it was still near impossible to come out publicly, she reported, as they "could lose their jobs, be denied credit, be disowned by family and straight friends, be denied housing, child custody, and be subject to public ridicule and harassment." The series isn't without its problems, particularly a one-sided examination of Griswold Park as a place for predators, but for the time, was likely eye-opening for many Erie residents. It also angered many.

"As an American, I wanted to see equal rights that are fair and just, but not to have these rights twisted into peversness [sic]," one letter-to-the-editor in response to the series stated. "There are murders [sic] and thieves too ... but is that to be legalized too because they should have their rights!"

In terms of these civil rights, nondiscriminatory advancements in the law are relatively recent. The first state (Vermont) didn't permit same-sex civil unions until the year 2000 and the Supreme Court didn't rule that laws criminalizing consensual intimacy between people of the same sex were unconstitutional until 2003's landmark Lawrence v. Texas. It would take until 2011 for "Don't Ask, Don't Tell" to be repealed and 2015 before the Supreme Court ruled 5-4 on Obergefell v. Hodges, as a result, requiring every state to recognize marriages of same-sex couples on the same merits as opposite-sex couples.

There are thousands upon thousands of stories — puzzle pieces — weaved between these events which help tell a wider, deeper, and more complex history. Libraries and the books within them are tools to help an interested person begin filling in those missing puzzle pieces. Identities, orientations, and the way in which we define ourselves and others are all a part of our shared history. It all contributes to understanding ourselves better as well as building empathy and understanding for others. This is not indoctrination, but knowledge.

To learn more about local LGBTQIA+ history, Erie Gay News, established in 1992, has an in-depth timeline: www.eriegaynews.com/history. You can also access their monthly publication, which includes news, events, and other information, as well as article archives going back decades. Resources can also be found through the NWPA Pride Alliance.