Piff the Magic Dragon bring his show to Erie for four days this January as JR's Last Laugh becomes his lair.

by Nick Warren
View ProfileTwitterInstagramRSS Feed
January 6, 2016 at 10:45 AM 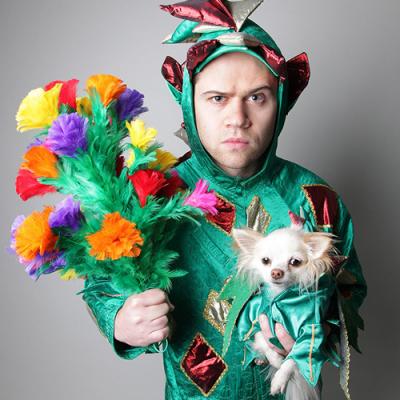 "You might have heard of my older brother," Piff grumbled as he stepped on stage this year at America's Got Talent. The audience was silent for a moment, then he calmly clarified, "Steve." From that moment on, everyone was on his side. Millions of people watched as he made it to the show's final round. Fans found an unlikely hero in the sarcastic Englishman wearing a shiny green dragon suit.

Magic comes naturally for Piff. He's a magic dragon after all. Always staying deeply in character, John van der Put deftly blends prestidigitation with deadpan comedic delivery. With him is his trusty sidekick, Mr. Piffles. The adorable long-haired Chihuahua inevitably finds himself in extraordinary peril. But never fear, his friend is a dragon to be trusted. On stage you'll see him having a snack, and making overly dramatic sound effects as he goes from trick to trick. Expect a lot of audience interaction along with all the laughs and illusions.

Piff started out in London, England. The magician gained TV notoriety earlier, appearing on Penn & Teller: Fool Us. He went on to tour with Mumford & Sons, and is visible on the cover of Babel. Since being on AGT, he's had a regular show at the Flamingo in Las Vegas.

He'll bring his show to Erie for four days this January as JR's Last Laugh becomes his lair. The response from the region has been strong, and it's worth noting that the club rarely does Sunday shows. If your post-new-year leaves you a little chilly, let Piff breathe a bit of fire into your weekend. As far as his humor goes, it's a dry heat. – Nick Warren